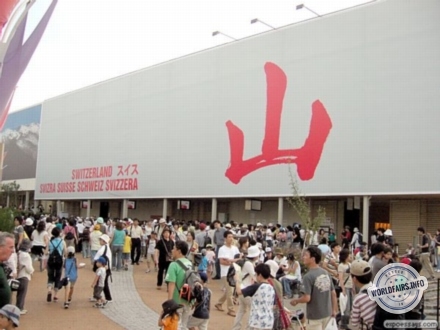 The theme of the Swiss pavilion was "the mountains" and represented the country's coexistence with nature. The idea was to let visitors experience the energy, strength, tranquility and calming effect of the mountains that not only constitute the geographical features of Switzerland, but also symbolise its culture.
A huge computer-designed and printed membrane covering a frame is stretched to reproduce a chain of high mountains inside the pavilion. Inside the mountains are five large transparent bubbles that represent the thematic sections. Visitors are admitted in groups of 15 and are fitted with a hearing aid that resembles a converted version of the Swiss army flashlight. When the light is shone on an exhibit, the flashlight provides voice information in Japanese or English about that exhibit. The tour of the exhibition areas is done in a dimly lit environment which allows visitors to feel as if they are exploring an unknown world. The exhibition sections present "Swiss Myths," "Visions," "Risks and Cautions," "Top of Science" and "Monte Rosa. The "Swiss Myths" section featured surrealist walls by Swiss artist Hans Erni, who was active in the early 20th century, and a dog - a Saint Bernard called Barry, which is used for search and rescue work in the Alps. The "visions" section presents Swiss adventurers who have won the favour of nature, such as the aeronaut Bertrand Piccard who, together with Brian Jones, made the first non-stop round-the-world balloon flight, the astronaut Claude Nicollier (from Vevey, Switzerland) and the leader Ernesto Bertarelli of the Alinghi syndicate, who won the America's Cup. The "Risk and Warning" section depicts the great disasters that have actually occurred in Switzerland as a reminder of the need to protect against disasters. The "Science" section presents the achievements of Swiss science, including research on artificial intelligence, the world's first web browser and computer-generated models of the Buddhist statues of Bamiyan in Afghanistan, which have now disappeared. The final section of "Monte Rosa" includes a project for the reconstruction of the famous mountain villa of Monte Rosa.