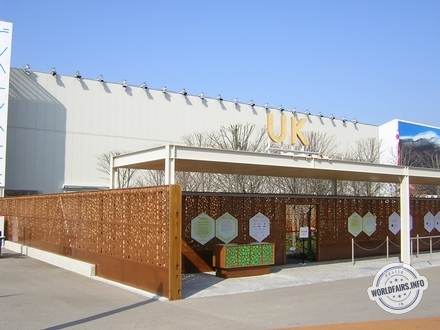 The British pavilion featured gardens, art and innovative technologies using nature with the motto: "Planet of Blessing and Bloom".
Half of the pavilion was taken up by a garden reproducing a woodland, including 40 lime trees and various familiar flowers that adorn the British seasons, such as daffodils, bluebells, foxgloves and angelica. Seven of the trees were cast works produced by nine contemporary British artists. While walking through the woodland, visitors could enjoy the colourful artworks inspired by nature. Leaving the woodland, they arrived at the pavilion.
Entering the pavilion, visitors felt as if they were in the British countryside with a beautiful blue sky, accompanied by birdsong. Visitors then entered the innovation zone, presented with seven exhibits, which focus on innovative ideas and technologies developed from the various scientific tips hidden in nature. Visitors were treated to an interactive demonstration of a number of inventions being developed in the UK. These included an adhesive tape designed to stick like the legs of lizards (geckos) to ceilings, a swimming costume that mimics the qualities of shark skin to enable the swimmer to swim more efficiently in water, and an electronic mobility aid that mimics the echo of bats to help people with impaired vision. An overhead projection surface carried shadow animations of geckos, bats, sharks and other normal icons for the exhibits below.