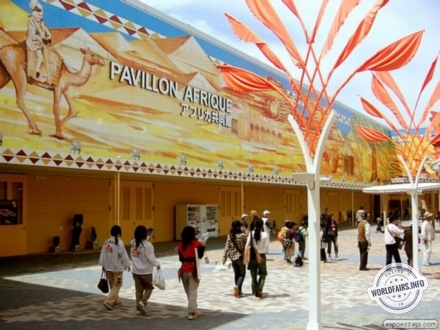 The joint African pavilion consisted of exhibits provided by 28 African countries (Angola, Benin, Burkina Faso, Burundi, Cameroon, Chad, Congo (Republic), Ivory Coast, Congo (Democratic Republic), Djibouti, Eritrea, Ethiopia, Gabon, Ghana, Guinea, Kenya, Madagascar, Mali, Mauritania, Nigeria, Rwanda, Sao Tome and Principe, Senegal, Sudan, Tanzania, Uganda, Zambia, Zimbabwe), and exhibits were shown, from north to south, according to the geographic location of the host countries. Visitors could virtually look at the entire African continent as if they had taken a real excursion to the countries concerned. Under the general theme of "Africa's great ride", the exhibits presented colourful attractions from various African countries.
In the centre of the pavilion was a symbolic area with a huge art object that symbolised the African continent. The area also featured exhibits that told the story of the earliest fossils of modern early man, a discovery in Africa that supported the theory that homo-sapiens originated on the African continent. The skulls, discovered in Ethiopia in 1997, were called Homo sapiens idaltu, the word for "elder" in the Afar language. A large screen presented "the cradle of humanity and Africa: Mother Nature".
The exhibition areas of the participating countries were filled with exhibits that symbolised their rich cultures and traditions. The art gallery contained indigenous masks, tableware, clothing and other objects that depicted African history and traditions. The front of the pavilion featured paintings of African landscapes on the walls, adding to the African mood of the exhibits.