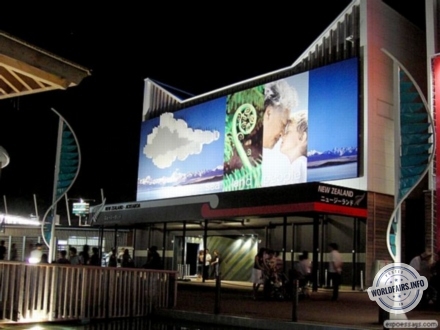 The New Zealand pavilion was a typical pavilion experience that presented four themes - news, sea, land and people - using a variety of imaging techniques. The exterior of the pavilion was dominated by a synthetic white cloud, visually representing New Zealand and Aotearoa (a Maori meaning of "the land of the long white cloud"). The interior of the pavilion was dark in colour so that spectators felt as if they were in a natural environment.
In the centre of the pavilion, the cloud condensed and fell onto a diorite rock (pounamu), which is seen as a symbol of land and sea in Maori legends.
A multi-projection film on a large screen greeted visitors and presented the New Zealand landscape through the eyes of a bird. Visitors could continuously enjoy a dynamic view of the bird's eyes as the bird flew high, and a view of the human eye as it flew close to the ground. In addition, there were a large number of large touch screens in the pavilion so that visitors could gather text and sound information by touching the screens. The New Zealand pavilion was designed by Wellington-based Story!Inc. which animated the blockbuster film "Lord of the Rings" and has evolved into a company that has done numerous projects for museums, theme parks and tourism documentaries in various parts of the world. He organised an exhibition on "Lord of the Rings" held at New Zealand's National Museum "Te Papa Tongarewa".