The Earth Tower of Nagoya City - 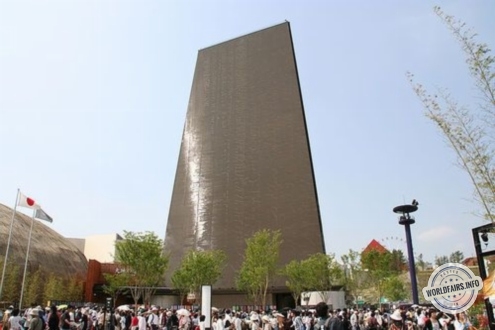 "The Earth Tower, one of the tallest pavilions at EXPO 2005 Aichi, Japan, is an eye-catching structure located towards the centre of the Nagakute Area. It is exhibited by the city of Nagoya, the capital of Aichi Prefecture.

Visitors to the Earth Tower will be able to enjoy unexpected artistic performances by nature through light, wind and water.

The tower itself is the largest kaleidoscope in the world. Reaching 47 metres in height, it is shaped like a triangular pyramid with the tip cut at an angle. The sloping glass ceiling forms an isosceles triangle. It faces south to allow maximum light into the pavilion. The rays pass through three discs containing coloured oil and then hit mirrors on the walls, creating giant kaleidoscopic spherical images about 40 metres in diameter. From the viewing area on the first floor, visitors look up to see a fantastic and mystical world created by the sun's rays.

Pleasant tones resound in the tower. These are original melodies created by the wind through a series of "Sound Forms", a musical instrument that has its own musical range. Three handmade Sound Shapes have been set up. Each is approximately 8 metres high, with a windmill at the top playing a xylophone/metallophone-like musical instrument underneath. A different musical arrangement is created depending on the strength of the winds, which change according to the season and time of day. The Sound Forms play an infinite number of harmonies according to the whim of the wind, to relax the visitors.


An Aqua-wall, formed by water cascading from the top, pleasantly envelops the tower. The uneven surface of the outer walls causes the water to jump, creating a variety of random patterns.

When night falls, the lanterns surrounding the Earth Tower light up. Approximately two metres high, they are wrapped in some 2,000 paper cut-outs created by the citizens. The shimmering light of the lanterns adds a wonderful touch to the atmosphere of the tower, inviting visitors into a steamy world.


Fumiya Fujii, a famous Japanese musician and computer artist, is the general producer of the pavilion. He says that he wanted to make The Earth Tower a pavilion that would bring well-being and softness into the hearts of visitors.

We hope that visitors will appreciate the kindness of people (paper-cut lanterns) as well as the soothing powers of nature manifested through the performances of the three elements of light (Kaleidoscope), wind (Sound Forms) and water (Aqua-wall).