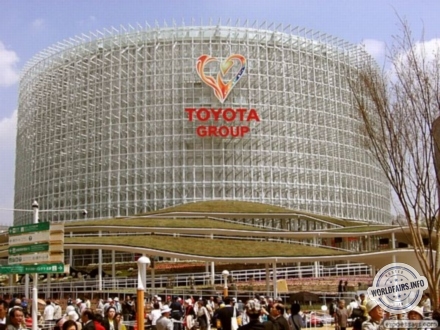 Since its founding in 1937, Toyota Motor Corporation, known as one of the world's largest automakers, has been based in Aichi Prefecture where EXPO 2005 AICHI, JAPAN will be held. At EXPO 2005, the Toyota Group, which consists of Toyota Motor Corporation and 16 other group companies, will establish the TOYOTA GROUP PAVILION under the theme of "Dreams, Joy and Inspiration of Mobility in the 21st Century".

A futuristic one-person concept vehicle "i-unit" is being developed for EXPO 2005. The i-unit offers dream mobility. Various functions required for the automobile of the future will be presented at the EXPO. These include systems for achieving an accident- and congestion-free society, such as the collision avoidance system and the i-unit lane travel system.

Another attraction in the pavilion will be the "Toyota Partner Robot", developed as a future technology. Several types of robots, including a trumpet-playing robot with delicate lip and hand movements, will also be featured. Other robots are also under development at Toyota Motor Corporation in areas such as personal assistance, social services, production and mobility.


The two-part entertainment, featuring Toyota's i-units and partner robots, will be not to be missed. It will start with a welcome show in which the robots will play musical instruments to warmly welcome the visitors. The second part will show i-units, robots and actors in a show full of vitality, with a giant 360-degree screen and sets creating an extraordinary atmosphere. Through the aspects of life, nature and future society presented on the stage, visitors will be able to see the pleasures of living and moving freely as well as a new relationship between man and the car.

This pavilion has integrated the basic concept of the "Global Eco-Communities Pavilion" and some ingenuity. The construction will be done with the intention of dismantling and reusing materials. The objectives are, on the one hand, the use of recyclable and renewable materials: waste paper and recycled paper will be used for the exterior walls. On the other hand, the reuse and complete recycling during the demolition to reach the zero waste objective. Electricity for the pavilion will be provided entirely by an off-site wind generator.