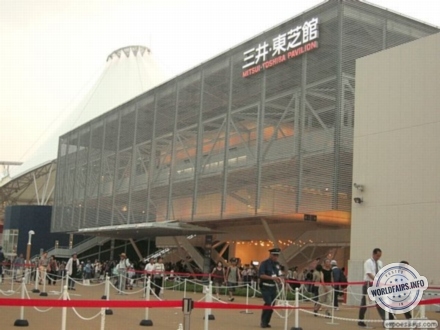 As you enter the Private Pavilion Area of the Nagakutee Area of EXPO 2005 Aichi, Japan, you will see a building covered by a wall of water that gives a cool feeling. This is the MITSUI-TOSHIBA Pavilion. Based on the concept of "Sensitive Earth", this structure is an expression of the vitality created by life on our planet Earth.


The theme of the MITSUI-TOSHIBA Pavilion is "Earth and the Splendour of Life" - A Brand New Planet for the New Generation. This theme will convey to children, who are our future, the importance of protecting our irreplaceable Earth and living in harmony with nature.

The main show, presented in the first floor hall, is the world's first 3D CG film in which the audience will appear on screen as actors. Entitled "Space Child Adventure: Grand Odyssey", this adventure film tells the story of humanity in the distant future being evacuated into space after the destruction of the Earth's ecosystem, and its journey back to Mother Earth.

Futurecast, the system used for this film, is the first entertainment system of its kind in the world. After entering, the audience uses a 3D scanner that captures information from the faces. This information is then instantly rendered as computer graphics and transferred to the film so that the audience members will appear as part of the actors. This innovative system allows the audience to become an actor in the film's story. The gender of the person whose face has been scanned is assessed from the face and the system can assign different roles accordingly. The 240 members of the audience, the capacity of the hall, will appear in one of the scenes of the film and act with Yuzo Kayama, a famous Japanese actor who will play the captain of the aircraft, and other actors. The film lasts about 14 minutes.


The outer walls of the pavilion are covered by the "Aqua Wall". Water flows over tubes placed parallel to each other, normally used for scaffolding. 20 litres of water per minute will be released from the roof and the water will flow from one tube to another creating a trickling wall of water. The latent heat of evaporation will lower the temperature of the pavilion corridors. A cooling breeze will also blow into the pavilion, limiting the need for air conditioning around the pavilion room. The Aqua Wall will help to reduce electricity consumption for cooling the pavilion interior. Water, which is stored in a basin surrounding the pavilion, will be pumped to the roof and reused. The scaffolding tubes will be reused at another construction site when EXPO 2005 is over. Many other efforts were also made during the construction of this pavilion to minimize material waste at the end of EXPO 2005, including the use of reusable steel and rented materials.

So come and enjoy an amazing video experience at the MITSUI-TOSHIBA Pavilion where you can appear on the big screen as an actor in the film.