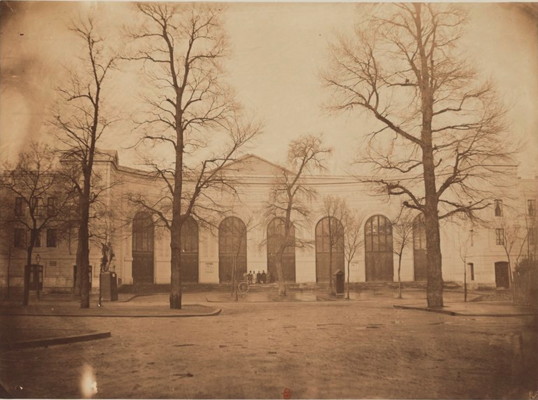 The building for the Exposition universelle des beaux-arts was located between rue Marbeuf and avenue Montaigne. The public entrance opened onto Avenue Montaigne, opposite the western end of the large gallery annexed to the Exposition de l'Industrie, which occupied most of the Cours-la-Reine. To get to the entrance of the Palais des Beaux-Arts, all one had to do was to walk along this gallery, following the roadway of the Cours-la-Reine, which led to Passy.

One entered through four doors, all of which gave onto the semicircular staircase facing the junction of Avenue Montaigne and Cours-la-Reine. It was necessary to prepare the entrance fee in advance, which was 20 centimes on Sunday; 1 franc on Monday, Tuesday, Wednesday, Thursday and Saturday; 2 francs on Friday. The employees in charge of collecting the entrance fees did not give change; a bureau de change was placed in a small chalet-shaped hut in front of the door, in the centre of the porch.
The Exhibition was open from nine to five.

To the right and left of the entrance were cloakrooms where canes and umbrellas could be deposited, if deemed appropriate; no remuneration was due to the employees in charge of giving you the number in exchange for the objects entrusted to them.

On the right, as you entered, was a buffet where you could refresh yourself while standing. At the far end of the building there was a restaurant where you could have lunch seated at separate tables. The restaurant was entered through the large French sculpture room.
The overall structure of the palace was a parallelogram 136 metres long and 72 metres wide. It consisted of two rooms measuring 21 by 23 metres, in the middle of which was a third room twice the size of the other two. Around these rooms was a first gallery, 11 metres wide, which surrounded them on all sides and which was itself divided into oblong or square rooms, depending on the external faces of the three rooms. Around this set of rooms was a long continuous gallery that went around the building. Finally, parallel to the two large sides of the parallelogram, there were small additional rooms intended either to accommodate paintings that could not be placed in the salons and galleries, or to contain rejected works that had not yet been removed by their owners. The latter rooms were barely lit, and the artists had called them the "rooms of the dead".

The salon for French sculpture was 80 metres long and 21 metres wide, and formed a separate building on the rue Bizet side, communicating with the circular gallery through two entrances. It was through this salon that one reached the restaurant we have already mentioned.

At the two corners of the entrance hall, a staircase led to the upper floor, which consisted of a continuous gallery, located immediately above the ground floor gallery, and intended for the exhibition of engravings, lithographs and architecture. This gallery had a length of 314 metres.

The rooms and galleries communicated with each other through large openings decorated with old tapestries from the furniture repository, whose harmonious tone, softened by time, brought out wonderfully the freshness of the colours of the paintings that framed them. These numerous openings made circulation very easy, in all the rooms, at the time of the greatest crowd.

Intelligent precautions had been taken against the heat, which could have become very inconvenient during the summer days. A long subterranean canal brought incessantly, through four open mouths under the circular couches of the large salons, a current of fresh air from the cellars, and determined by numerous openings in the roof.

The immense values entrusted to a temporary building constructed almost entirely of wood and plaster had greatly concerned the attention of M. Lefuel, the Exhibition's architect. A fire could have destroyed in a few hours artistic riches that could not be valued in money, and whose loss would be an irreparable misfortune; the English exhibitors had been so keenly struck by this danger, that they had hesitated for some time to send their products to the Exhibition. Their fears were exaggerated: besides the fact that the most meticulous precautions were taken by the administration in charge of the interior police to avoid any imprudence, a vast water reservoir measuring 4 cubic metres had been built at the corner of the Sculpture Hall, at an elevation of 14 metres; on this reservoir was constantly on sentry duty, night and day, a fireman ready to act at the first signal. About forty-eight ro-binets of a strong calibre, fed by the conduits of Chaillot, Monceaux and the Pantheon, and placed on various points of the building, could be opened instantaneously and provide water in abundance for the service of the pumps. Finally, two fire stations with pumps were installed at both ends of the building.