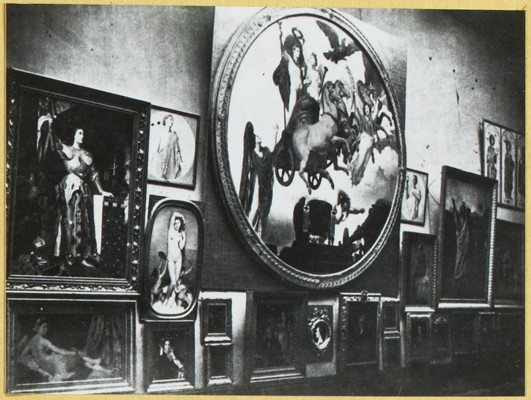 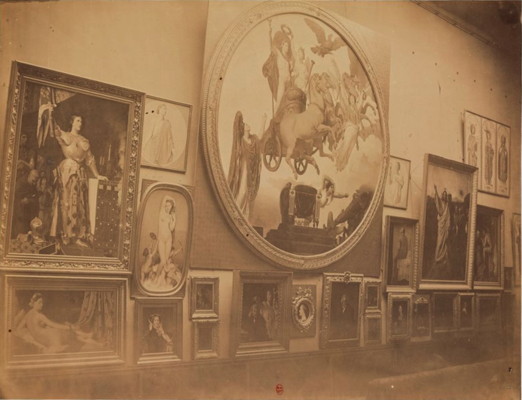 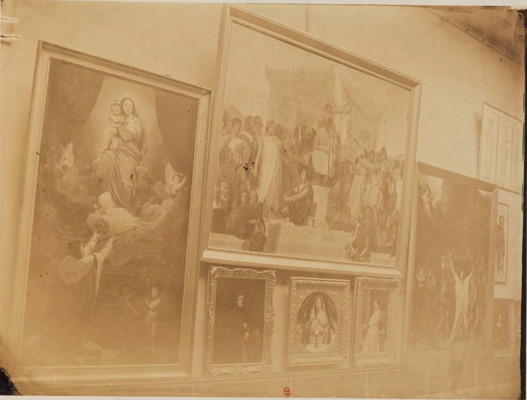 France. - This exhibition was very remarkable. M. Ingres had wished to place the works of his entire life before the eyes of the public, in a room occupied exclusively by his paintings. He had wanted to direct the arrangement of his paintings in person. The administration had given him complete and absolute authority in this respect.
We began our walk on the left wall. A double divan, placed in the middle of the room for most of its length, allowed us to take a little rest without losing anything of this splendid exhibition.
M. Ingres, born in Montauban (Tarn-et-Garonne), was one of David's last and most illustrious pupils. He was awarded the first Grand Prix de Rome in 1801; he was decorated with the Légion d'honneur in 1825, and appointed member of the Institut at the same time. Officer of the Legion of Honour for several years, he was made Commander of the Order in 1845.
This exhibition was important enough for us to make a sort of catalogue of it without omitting anything.
In the four corners of the room were symmetrically arranged the cartoons of the Dreux chapel and the Saint-Ferdinand chapel, classified under the same number, 3340.
No. 3375 includes several study heads.
3344. Full-length portrait of Napoleon, first consul, belonging to the city of Liège (Belgium).
3339. Vow of Louis XIII (salon of 1824), belonging to the city of Montauban.
3370. 1834 portrait of Count Molé.
3337. The Virgin with the Host, painted in 1854.
3345. Homer deified, better known as the Homer ceiling. This painting formed the ceiling of the grand staircase of the Louvre. Homer receives the homage of all the great men of Greece, Rome and modern times. The universe crowns him; Herodotus smokes incense; the Iliad and the Odyssey are at his feet; it was painted in 1842.
3365. Portrait of Mme la comtesse d'Haussonville, daughter of M. le Duc de Broglie.
3338. Saint Symphorien, painted in 1837, belonging to the cathedral of Autun.
3368. Portrait of Mrs. L. B.
3348. Oedipus explains the enigma of the Sphinx, painted in 1808, belonging to Count Duchàtel.
3359. Henry IV playing with his children when the Spanish ambassador is admitted in his presence; painted in 1824.
3372. Portrait of M. Bertin aîné; painted in 1832.
3301. The poet Arétin receives with disdain a gold chain sent to him by Charles V; painted in 1848.
3357. Don Pedro de Toledo, being French ambassador, meets in the gallery of the Louvre a page carrying the sword of Henry IV; he advances, puts a knee to the ground and kisses it, saying: "Let us pay the honours to the most glorious sword of Christendom;" painted in 1814, belonging to M. Dernier, at Montauban.
3304. Portrait of Mrs. D..
3352. Bathing girl.
3350. Reclining Odalisque; painted in Rome in 1814
3341. Pope Pius VII holding chapel, better known as the Sistine Chapel; painted in 1814.
3336. Our Lord Jesus Christ giving to St. Peter the keys of paradise, in the presence of the apostles; painted at Rome in 1820, belonging to the emperor.
3373. Portrait of Mr. Ingres in his youth, painted in 1814.
3342. Pope Pius VII holding chapel; a religious of St. Francis comes to kiss the feet of the pope before beginning his sermon; painted in Rome in 1820.
3374. Portrait of M. Ingres père.
3367. Portrait of Mme la princesse de Broglie.
3355. Charles V, then regent of the kingdom, returns to Paris after the expulsion of the Duke of Burgundy, and receives the provost and the aldermen of Paris that Jean Pasto.el and Jean Maillard present to him, painted in 1822.
3371. Portrait of the Marquis de Pastoret. 3353. Bather, small study.
3356. Joan of Arc attends the coronation of Charles VII, in the cathedral of Reims; she is accompanied by her squire Doloy, her chaplain Jean Paquerel, an Augustinian religious, and her pages; painted in 1854.
3349. Roger delivering Angelica (subject taken from the A-rioste); painted in 1S49, belonging to the Emperor. 3331. Odalisque; painted in Rome in 1839. 3347. Birth of Venus Anadyomena.
3362. Aretin having spoken badly of Tintoretto, the latter invited him to come and paint his portrait. Before starting, Tintoretto came forward armed with a long pistol, with which he measured him from head to foot, saying coldly: "You have two and a half measures of my pistol"; painted in 1848.
3358. The sword of Henri IV; the same scene as the one represented by the picture 3357, takes place in front of the duke of Epernon, Gabrielle d'Estrées, Malherbe and the cardinal Duperron; painted in 1832.
3363. Chérubini, historical portrait; the Muse of music extends her protective hand over the head of the composer; painted in 1842, belonging to the Emperor.
3360. Philip V, King of Spain, giving the Order of the Golden Fleece to Marshal de Berwick, after the battle of Almanza; painted in 1822.
3363. Apotheosis of the Emperor Napoleon I; painted in 1853. This picture forms the ceiling of one of the salons of the Hôtel de Ville, Paris.
Leaving Mr. Ingres' salon, we turned left to return to the English gallery and resume the end of this gallery which we had neglected while browsing the English exhibition.