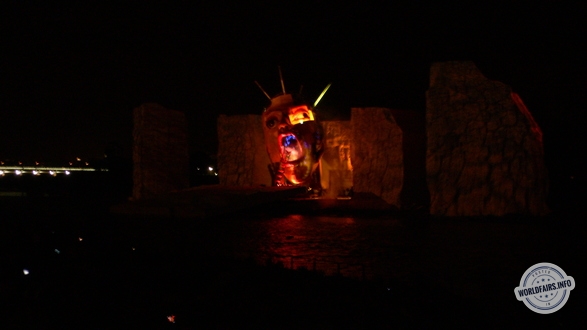 This is a splendid, poetic, simple and captivating show, designed to be seen live. Music is of key importance throughout the show, with an original composition by Zaragoza musician José Luis Romeo, entitled Song for an Iceberg, which accompanies the entire show and highlights the most intense moments.
This project by the Focus company is conceived as a fable that warns of man's responsibility for the current situation of the planet and his necessary involvement to change the course of a future that is predicted to be disastrous. The artistic director is Calixto Bieito, who is well known in Spain and abroad for his long career on the stage.
The show opens with an image of natural balance in which penguins dive into the waters of the Ebro. This equilibrium is broken as a result of human actions, which is why the iceberg opens up and crumbles into several blocks. A cybernetic-looking human face emerges, the origin, victim and stunned observer of pollution, toxic rain, deforestation and rising temperatures and sea levels.
In the face of chaos and fire, a teenager springs up from the flames, represented by the long-awaited song, and enters with new strength to offer a glimmer of hope. From this gap in the ice, a large geyser-like jet of water is born, which gushes out thanks to the teenager's new energy and the great complicity that links him to the Ebro.