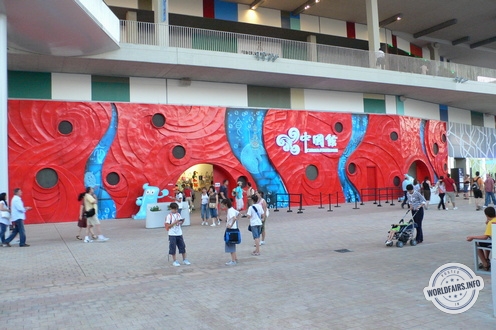 The exhibition in the China pavilion, 'Man and Water: Return to Harmony', invites the visitor on a journey back to the origins of this thousand-year-old civilisation and attempts to restore the balance between human action and nature. The tour begins with an introduction to the Yellow River and Yangtze River civilisations, which invites visitors to explore the relationship between water and the development of Chinese civilisation. The visitor is shown a map with the country's rivers, as well as audiovisual documents and objects related to the Asian people. In the second part, the focus is on China's water management projects, such as the Hangzhou Grand Canal and shows the Ancient Silk Road on the Sea. Then a room shows the film 'The Virtue of Water' which the visitor can watch before moving on to the fourth and final part of the tour, a reflection on the need for harmony between man and water. The pavilion presents man in modern society, with a strong desire for material life that makes him ignore the protection of the environment. Through video films and interactive panels, the importance of restoring the traditional balance between man and nature is emphasised.