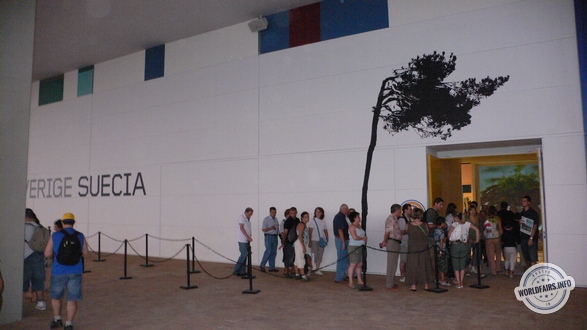 The trees welcome visitors to the Swedish pavilion, which is divided into two parts. In the first part, a film is shown on a circular screen, while in the second part, information on new Swedish environmental technologies is presented in a large landscape of trees. In addition, the pavilion has a Children's Area that is inspired by Swedish children's culture, with toys, films, books and activities for the little ones. The film projected on the walls of the pavilion deals with the passage of the sa/sons in Sweden. It is a dynamic document that gradually shows the slow changes between the seasons, the climate and the time of day in Sweden. In addition to the film, the pavilion contains an impressive landscape of over 80 birch trees. Some of them are grouped together, creating interior spaces where it is possible to enter and watch films on screens about different facets of Swedish culture: culture, innovation, society, population, water, sports, health and nature, as well as its environmental technology.