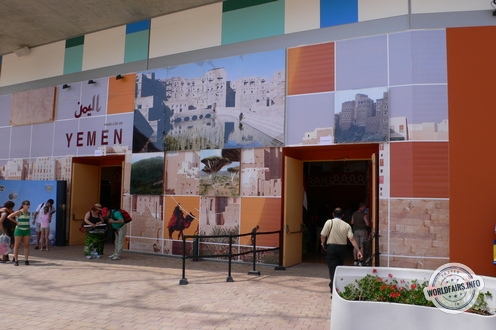 The Republic of Yemen presents to the visitor the modern techniques it has implemented in the treatment and extraction of water resources. This splendid and fertile territory, where luxury is almost a way of life, wants to show the world an image that will surprise the visitor: that of a rich civilisation proud of its roots. In the pavilion, the public will be able to learn about the definition of water sources and the uses to which this wealth is put, as well as the methods used to obtain it. Yemen presents the most significant projects and works in urban and rural areas carried out during the presidency of Ali Abdullah Saleh, which show a change in the type of hydraulic projects, with the construction of numerous dams. These achievements played a fundamental role in setting in motion water supply and conservation projects. In addition, the exhibition provides an opportunity to learn more about the country's agricultural activity and the use of water for irrigation. The pavilion hosts numerous water-related events and tourism promotion activities. In addition, the traditional Yemeni market is presented, offering a wide range of goods.