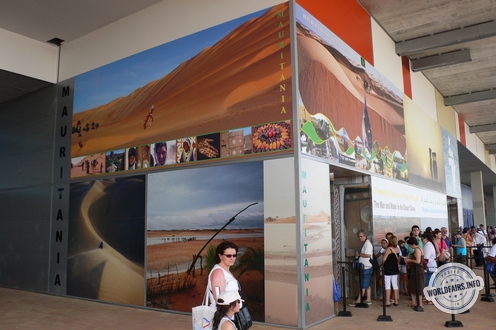 Mauritania presents a space full of reproductions of singular spaces and symbols of this country. This proposal tries to adjust all these elements and those required by the organisation so that the pavilion can be interpreted as an expositive unit. The fundamental idea for the production of this pavilion is that the elements that are presented are as faithful as possible. This is an aspect that may seem obvious, but in a montage with such figurative weight, it cannot be lost sight of. In this way, the walls and the traditional house have been built in the same way as in their place of origin, Mauritania. The pavilion can be read as two large spaces differentiated, among other things, by the change of floor. The spaces 'city' and 'aquarium' on the one hand and 'landscapes' on the other conclude the exhibition. In all of them, it was decided to present the same appearance and nature of the materials that envelop the space (adobe and stone) and different aspects of Mauritanian culture are exposed.