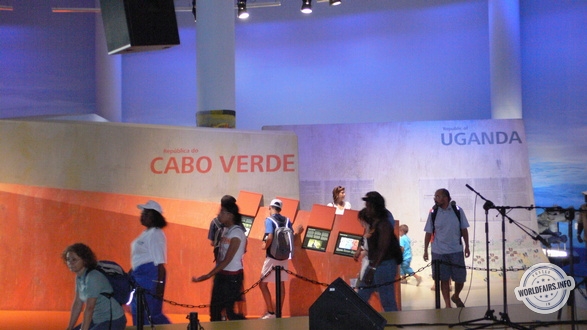 The Cape Verde exhibition focuses on agriculture in arid conditions, drip irrigation and the new water saving technology that replaces the old system of extension irrigation. Every drop counts' is the title of the exhibition where the visitor learns about the present and future of water management techniques in water-scarce areas, such as desalination and dam construction. Increasing water consumption in cities and a developing tourism industry pose a greater challenge for water supply in Cape Verde. Thus, the visit shows desalination as the most promising technology to supply all consumers. The construction of the first dam in the country two years ago also appears in the tour, along with the government's initiative to generalise works of this type to increase the availability of water for irrigation. Cesaria Evora's fado and other suggestive musical proposals such as the 'coladera' and the 'funana' will flood the afternoons of this Pavilion. In addition, Cape Verde is promoting the assets of its capital, Cidade Velha, and the carnival that has made this island internationally known.