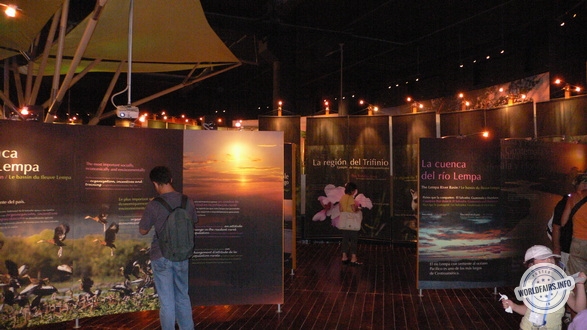 The name Guatemala means 'where forests abound'. The Guatemalan territory was the cradle of the Mayan culture, which inhabited the Mesoamerican region from 2000 BC until the 10th century, when the great ceremonial centres were abandoned. In nature and its different manifestations of life, the Maya found a sacred link, which is remembered today at the Expo. How did they do this? Well, through the exhibition of images relating to Mayan cosmogony. For example, the cheese tree. Its roots go back to the underworld and its branches extend to the stars. This tree is the axis of the universe where the souls of the dead pass from one heaven to another, until they reach the highest heaven where they finally rest. So too with the crocodile. He carries the world on his back. On him depends the timely arrival of rain and the fertility of the earth. There are also images of the jaguar, which symbolises the night and the stars of the firmament, a favourite of shamans. There are also images of the quetzal, which symbolises fertility and absolute freedom. The great biodiversity of today's forests was largely possible thanks to the protection and management of the ancient Maya.