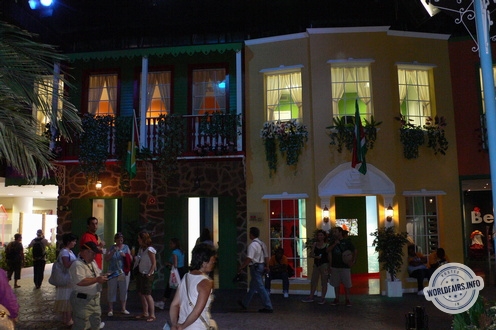 It was called the Land of Many Waters by the indigenous Amerindians, a very appropriate name for a land covered in dense forests and with an infinite number of rivers and the Atlantic Ocean. Located on the northeast coast of South America, the Cooperative Republic of Guyana is dotted with undiscovered wonders: virgin jungles, rivers that no one has yet navigated and mountains that have yet to be scaled. This natural wealth is shown in all its splendour in the Guyana pavilion. The visitor can admire the beauty of a country lined with tropical vegetation, where rushing waterfalls (some of them among the largest in the world) interrupt the course of many rivers, streams and lakes, and where mountain ranges coexist with savannah. Guyana's coastline is dotted with beaches and picturesque towns. Much of the country is below sea level, which is why it has had to be protected from flooding by systems of dykes and canals. Its environmental policy addresses issues such as the rational use of resources, pollution control and the protection of indigenous peoples and their natural environment. Also noteworthy is its fight against deforestation; Guyana has signed several international cooperation agreements.