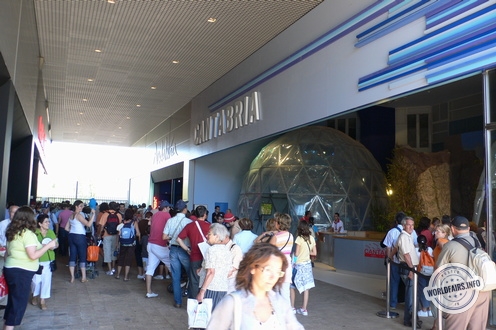 The conceptual idea of space in the Andalusia pavilion is based on the intersection of two circular areas that resemble the shape of a drop of water (an expression of the small unit in nature and a representation of cosmic space; but also a unitary element of the Expo subject). The exhibition stand is divided into areas that are specially differentiated according to this idea of the universal concept of space: the microcosmos and the macrocosmos. In the first area, the Gallery is the small scale, the contact with the immediate proximity of the human being and nature: it is a curved space with a modern technological aspect that prepares the visitor for the second area, the external space. The scale of the viewer is minimised in a double-height room covered by a large semi-circular projection screen (27 m long, 5 m high). Through this window, a dynamic explosion is created that surrounds the viewer in an 'Andalusian' scene and places him in the middle of the story, as a character in the story. In this room a multimedia show with video projection, water games and live performances takes place.