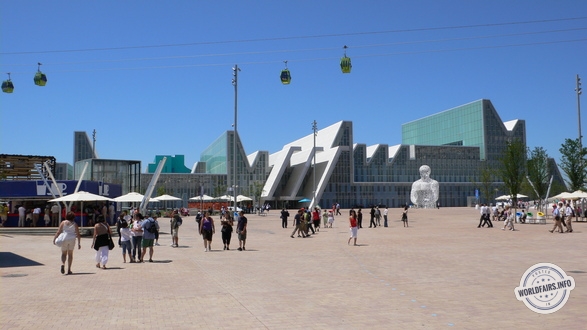 The Congress Palace is the main space for the debate on water at the 2008 International Exposition. During the exhibition, the meetings of the Water Tribune and the Zaragoza Charter, the ceremonial events of the national days and in honour of the countries and autonomous regions and a series of eight payment shows that unite the best of the performing arts will take place here. The building houses an auditorium, a multi-purpose pavilion and various modular rooms that are linked together through a large common entrance. The auditorium has been designed to free up the stands and the mezzanine, resulting in a hall with capacity for 1,465 people, divisible into two for smaller conferences and with optimal acoustic conditions.
The exhibition pavilion will be used during the Expo period as the Water Tribune, so that its positioning, with the possibility of independent access, allows it to be used for other exhibitions (one or two simultaneously), seminars or other events.
The modular rooms will be used during the Expo as a press centre, offices or meeting rooms, if desired. A large underground plant houses the service areas, facilities, dressing rooms, shops, kitchens, etc., which allow the correct functioning of a centre with its characteristics without interfering with the public areas of the building.
One of the most outstanding elements of its architecture are the projections that dominate the main entrance. A spectacularly large piece leans some 15 or 20 degrees from the vertical supported by small metal pillars and a roof.
The new Congress Centre draws a broken and variable profile in the Expo 2008 park that dialogues with the different spaces it houses and expressly shows both the presence of natural light and the meeting of the building with the ground. Like a white and shining mantle, a large cover surrounds the different volumes, sheltering a vast interior space (fluid and continuous) and thus manifesting the public and institutional character of its programme.