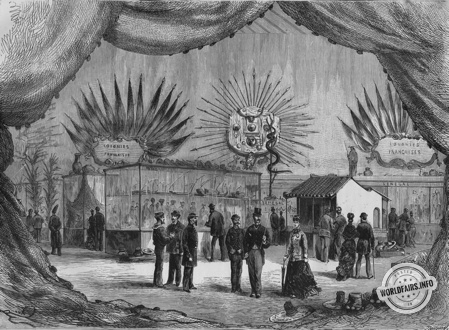 Our colonies! When we think of the past, we bitterly regret that they are no longer what they once were.

The reader will allow us to speak to him here about Algeria only from the geographical and administrative point of view, since we have already visited the Algerian pavilion in the Trocadero Park and examined in detail the very interesting and picturesque exhibition of our great colony.

The surface area of Algeria is forty-three million square hectares. It has three zones parallel to the sea:
1° The mountainous zone of the coast, which, except for rare plains of little extent, forms a bulge along the shore of the Mediterranean; it is occupied by the fraction of the Berber race known as the Kabyles. These mountain dwellers practise small-scale farming, work with iron, engage in a few crude industries, and live in stone houses grouped in more or less compact villages. This is the home of the olive tree, the vine, the fig tree, and on some points large livestock is raised.

2° The interior zone, formed, with the exception of a few mountainous massifs, by a series of plains stretching from the Tunis border to the Moroccan border; it is inhabited by populations to whom Dr. Warmer has given the name, somewhat baroque but very accurate, of Arabized Berbers or Berberized Arabs. They live in tents and move every year, according to the seasons and the needs of agricultural work, within a radius that does not exceed the respective limits of each tribe; there are no gardens or orchards, the trees are very rare; they possess numerous flocks of sheep and breed horses.

3° Finally, the zone closest to the desert, comprising immense steppes where cultivation is possible, on certain points, only in rainy years, near streams that do not dry up in summer, near abundant springs.

Education is, at present, completely organised in Algeria and gives the most satisfactory results.

From the commercial point of view, business is developing in a way that is interesting to note.

These few figures are sufficient to give an idea of the commercial development of Algeria and the progress of colonisation.

Let us now go through the exhibition of the other colonies.

Guiana has sent superb timber, from which the cabinet-making and building industries could profit greatly.

In addition to its tobacco, rum, rubber, coffee, manioc, spices, bamboo baskets, pottery made in the penitentiaries, and very curious flowers made from the multicoloured feathers of the birds that live under its sky, it has sent gold ores and nuggets from the Kourouaie and Approuague placers. In 1876, these placers brought in more than five million francs.

Saint-Pierre and Miquelon, with a total population of five thousand, sent nets and fishing gear. Cod fishing is their main resource.

Education is well underway and the student work on display is worth noting.

Guadeloupe has sent similar products. Let us note only the excellent guava jams made by Mme Toutoute, a Negress who has become one of the most important traders in the country.

Here is Gabon, with its elephant and hippopotamus ivories; then Cochinchina, which is particularly noteworthy from a food point of view.

We noticed mainly smoked meat that had been prepared for ten years: this is buffalo meat beaten and dried in the sun, containing in a small volume a good quantity of nutritive matter, not very delicate of course; here are ducks preserved by similar processes; then swallows' nests, salted fish, Cambodian pepper, tobacco; samples of thao, suitable for replacing the baudruche; cotton, silk, mats and the loom for making them, fishing nets, Annamite boats; pig's leather and pelican feathers. Here is a model of an Annamite dwelling, books printed in indigenous characters, mouldings taken from Angkor-Wat, I in Cambodia; let us finally mention some very pretty small pieces of furniture inlaid with mother-of-pearl, and vases and planters made from elephant feet with tanned leather and polished nails, j Let us finally note the ivories of French India, its woods, its skins and its muslins, the preserved food, sugar, coffee, cocoa and vanilla of Reunion. We will finish by mentioning the pearl oysters of Taïti which constitute the greatest curiosity of his exhibition.