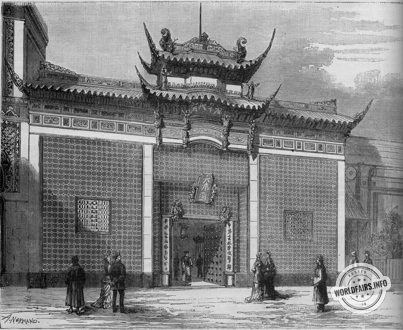 Between Japan and Spain, China raises its characteristic façade, quite characteristic indeed, if it has only this merit, with its angles raised towards the sky: the roofs in China follow the example of the eyelids, and I would not be surprised if it were the same wherever one obeys one's genius.

The Chinese facade represents a square building, with slate-coloured walls decorated with lozenges and octagons traced in white. Two bays closed by an artistically cut wooden frame, in azure white, are pierced in this wall on either side of a massive bright red door, strangely decorated with cylindrical projections of the same colour, the centre of which is adorned with gold coins pierced with a square hole. This door is surmounted by a shield bearing a Chinese inscription in golden characters, guarded by two painted wooden native warriors, sculpted with infinite art and armed to the teeth. Above, a black wooden crown cut out, forming a double roof with the angles turned up as it should be.

M. Camille Pelletan described this façade with enthusiasm:
"The Chinese exhibition opens most interestingly with a façade reproducing, it is said, a piece of one of the four enclosures of Peking. This forms a large wall on which a kind of slate-coloured tile is painted. The wall is pierced by windows of blue-grey cut latticework, and a high door, the leaves of which, with a formidable framework, armed with bits of round beams, are painted bloody red. Above the bay, groups of gilded dolls, representing soldiers, and two formidable winged dragons, ungloved, bristling, holding in their mouths, one a sabre, the other a standard, lean rather strangely. A band of chimerical ornaments runs along the top of the wall. A bell tower, with its roofs on top of each other and their edges rolled up, crowns the building and completes its physiognomy.

"A section of wall, entirely covered with mats with coloured Chinese characters, separates the Celestial Empire façade from the Japanese one, which is no less interesting. The entrance, which opens under a light wooden canopy, is preceded by a massive structural barrier; on the wall are painted, in frames of that exquisite ornamentation of which Japan possesses the secret, a map of the country and a plan of Tokyo, the capital. A delightful garden, surrounded by bamboo trellises, adorned with two beautiful blue vases, refreshed by two porcelain fountains in the shape of a flower, pouring streams of water from all the petals of its corolla into a green basin, enlivens the façade with its vegetation.

"Thus appears to us, in the tumultuous jumble of all the architectures, this still new world of the Far East, and which exerts on all the visitors of the Exhibition a so irresistible attraction.