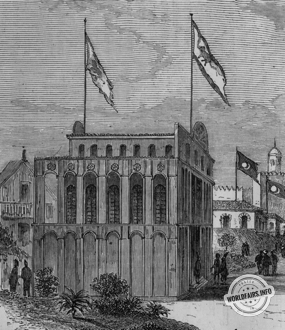 The attraction of the Persian house in particular is irresistible, and the crowd would surely storm it, at the imminent risk of collapsing under its weight, if the precaution were not taken of allowing only a small number of people to enter in turn.

The Persian house, a reduced model of a bourgeois house in Tehran, is square in shape, with very sober exterior ornaments, painted green with gold borders. It is pierced all around by numerous windows topped with bull's eyes. The portico of the main entrance consists of a peristyle with white stone columns whose capital mouldings are enhanced with gold. On the first floor there is a loggia with similar columns and a wooden balustrade, carved by Persian artists and brought from Persia. The national lion is sculpted on the pediment. The base of the façade is decorated with bright Persian faience.

One enters first into a large vestibule leading to a resting room furnished mainly with oriental divans, and in the centre of which there is a basin from which a jet of water rises, refreshing the air of this delightful room, which communicates with a small meeting room. Up to the height of the support, the walls of this rest and meditation room par excellence are covered with brightly coloured glazed tiles; the rest of the walls, as well as the ceiling, are decorated with softly coloured paintings, where the eye also rests. The first floor is reached by a narrow staircase in the Persian style. At the entrance, there is a waiting room decorated with earthenware, leading to the already famous hall of mirrors. This is a room of medium size, slightly vaulted; the ceramic decoration of the base is the only exception to the profusion of glass which covers the walls of this strange room: the vault alone is covered with more than a million fragments of glass set into one another, arranged with apparent oddity, but in such a way as to produce all the imaginable varieties of the phenomenon of reflection; and the effect is all the more magical because the windows^ have coloured stained glass. Five chandeliers, also entirely made of ice, hang from the vault; and one can form an idea of the dizzying fireworks which this room presents, at nightfall, when the five chandeliers in question have been lighted.

It is perhaps a little dazzling for eyes more accustomed to the discreet mists of the West, and no doubt one would not last long and would soon eagerly seek a pleasant and less boisterous retreat: one would find it there, right next door, in a salon simply decorated with paintings that are not very bright, furnished with a discreet and characteristic luxury. - But the truth is that the visitor passes by almost indifferently, as he has passed through the rooms on the ground floor, while the marvellous hall of mirrors absolutely captivates him.