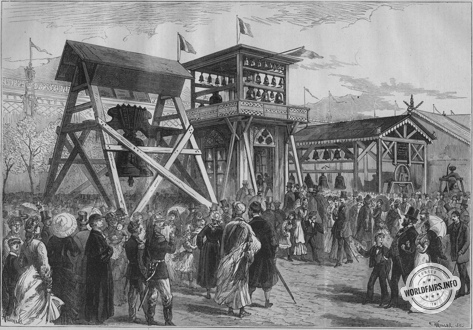 We are going to take an interest in the carillon exhibited by M. Bollée, a mechanical founder in Le Mans, who was not at his beginnings, for he already had a collection of bells harmoniously arranged, like those presented, and set in motion by means of a clockwork movement, at the Universal Exhibition of 1867.

The vibrations of this powerful carillon hardly allowed one to pass in the neighbourhood without being tempted to hear them more closely; and it was not a waste of time, thanks to the improvements made to this musical instrument by the skilful founder of Mance.

It was in Belgium, at Aalst, in 1487, that the first carillon was built by a local foundryman named Koeck, and by the beginning of the sixteenth century, Flanders, a part of France and Germany were widely provided with them. The memory of the carillons of Dunkirk, Bruges and the Samaritaine in Paris had been preserved, but they were far from the perfection that has been achieved in our time.

As for the casting of the bells themselves, it was no small matter.
It was necessary, first of all, to know perfectly well the art of preparing the bronze alloy of which they were made, and to be on good terms with Jacob's rod, a scale of proportions indicating the measure and weight of bells, which was handed down from father to son, in the families of founders, like a secret remedy.

This being the case, to make a bell, one began by building a brick mould which was covered with a layer of clay called a false bell. The figures and ornaments of the bell were traced on it and it was covered with a mantle also made of clay, which took the impressions of it. The mantle was lifted, the false bell was destroyed, the mantle was let down and the bronze was cast in the void left by the false bell.

In order to give more virtue to the sound of the bells, the faithful used to throw their gold and silver jewels into the crucible; but the precious metals were poured into the pockets of the founders, who had taken care to make a special hole in their furnace beforehand.