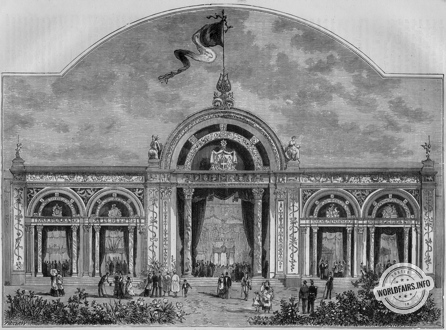 The Italian façade is delightful. It cannot be said to be more or less remarkable than its neighbours; it is itself, its originality makes its charm and it has the merit of perfectly summing up the Italian genius, with its natural taste, its united knowledge of harmony in matters of colour as well as in matters of music.

One can only congratulate the Italian Commission on the fine result it has achieved; thanks are also due to His Highness the Duke of Aosta, who has presided so vigilantly over the installation of this remarkable part of the Exhibition.

It is only fair to give a few details about this kind and intelligent prince.

Amédée-Ferdinand-Marie, Duke of Aosta, former King of Spain, is the second son of the late King of Italy Victor-Emmanuel II and the brother of the present King, Humbert I. He was born on 30 May 1843.

Prince Amédée was vice-admiral in command of the Italian navy's evolutionary squadron when Don Juan Prim came to offer him the Spanish crown.

We know how, after having ascended to the throne on 30 December 1870, this prince voluntarily descended from it on 11 February 1873 with a dignity to which even those who were not his supporters were the first to pay tribute.

Returning to Italy, he regained the sympathies of his compatriots who had not been able to see him leave without regret.

The Universal Exhibition of 1878 gave him the opportunity to be useful to his country and he gladly accepted the position of President of the Italian Commission.

Let us return to the façade.

A large arcade, flanked by two smaller ones on the right and left, supports a majestic and coquettish dome; at the corners of the upper balustrade, genies spread their wings. The author is the sculptor Monteverde, who has just received the medal of honour.

The pilasters of the arcades are in white stone and the columns imitate cipolin marble.

This facade is a very exact type of Italian art in the 14th century.

Finally, there are frescoes in grisaille in the space between the arches.

To give a background to all this mass of diverse but harmonised colours, red curtains have been hung under the arches to complete the desired effect.

Visitors entering the Italian Exhibition from the front will first encounter a gallery that occupies the entire width of the monument and is decorated with plants and shrubs.

Above the entrance door, the portrait of King Victor Emmanuel, in full regalia, wearing a helmet with white plume.

On the right and left, the portrait of King Humbert and that of the Queen; the latter is perhaps more successful than the one we noticed in the fine arts class.

Among the statues - we shall only mention for the record the insignificant busts of Garibaldi and Mazzini - there are some in front of which one is forced to stop, first, the little beggar, who is holding out his begging bowl so prettily, who looks so alive that one wants to give it to him; next to him, an amusing motif: a young man is holding a cat in his right hand by the scruff of the neck, and a mouse in his left hand. To depict the face of the cat is impossible.

Another very nice motif is a little child who has hurt himself while trying to mend his wooden sword. He wanted to nail a piece of wood representing the guard of the weapon, so he armed himself with a hammer and a nail. Unfortunately, instead of hitting the nail, the clumsy boy hit his finger, so you have to see his pitiful face.

As you enter the exhibition, you find a remarkable work on your right; it is Mozart dying; the great composer is _ lying in an armchair, his head turned back on the pillow, a music book in his hand.

At the entrance to the large gallery, we note in passing a delightful water subject.

Two little children, the big brother and the little sister, are holding each other tightly under an umbrella; for it is raining, it is raining very hard... water, real water, which flows over the umbrella and falls at the children's feet. It's a water game that couldn't be more successful. Author, Mr. Andrea Boni.