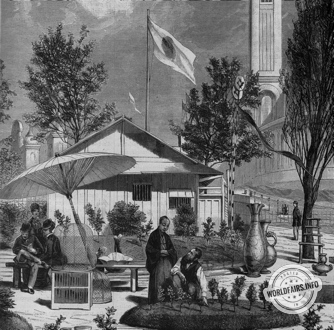 Here is the beautiful description of it given in the newspaper Le Rappel by a much-appreciated writer, M. Camille Pelletan:
"A singular standard, representing a fish which seems to swim in the sky as soon as the wind makes it undulate, announces from afar the empire of the rising sun. Other flags, marked with a white character on a purple background, float along bamboo poles, at the tip of which shines a bizarre tangle of golden discs. There is a small house, shops, a farmyard, a garden, fields; it is a small corner of Japan.

"From the outside, the palisade of bamboo skilfully crossed and knotted with hair, the characteristic entrance made simply of four beams, the amusing silhouette of the large plank roofs falling very low on the front of the house in the midst of small trees, compose a curious picture to which is missing only the ordinary personnel of Japanese scenes and manners: gentlemen in their long, gaudy robes with dragging sleeves; warriors strapped into their heavy carapaces of burnished and blackened metal; ladies with astonished eyebrows, their buns bristling with strange colifichets.

"The main building is a small house that almost disappears under these large sloping roofs. It is very lightly built of light wood. Bamboos form the upper edge, and the edge of the roof, which is of planks, other bamboos, thin beams, here and there, to vary the appearance, some large branch still covered with its bark, constitute the framework. The walls are made of planks; sometimes they are also movable walls of white paper stretched on a frame; these walls are removed during the day; the two fronts of the house let the eye enter freely. The construction, outside, keeps the natural colour of the wood, without painted or sculpted ornaments of any kind.

"The interior is divided by two partitions that intersect in four small rooms, the floor of which forms a slightly high level above the ground. In front, the roofed edge, supported on spindly rods, shelters a covered space, where the floor is decorated with a row of glazed pebbles and tiles; bamboo blinds with herons and flowers painted on them, paper lanterns, trimmed with silk tassels, are hung in disorder; behind, the rooms, open to the outside, in the whole width of the façade, like the stage of a theatre, present a charming picture. The mats and the beautiful carpets which cover the floors, the hangings which hide the walls, some screen whose light gold background is strewn with small witty figures, the lacquer shelves with drawers and irregular compartments, loaded with porcelains, enamels and bronzes, form a decoration of delicate taste, of harmonious cheerfulness.

"In miniature proportions, these are the buildings of Japan, as we can imagine them from the documents. We know that stone is rarely used there, and when it is, it is for massive, bare masonry, with the sole purpose of defence. This people, so lively, so eager to learn in their brilliant and fragile arts, must be little concerned about the eternity of their monuments. The beautiful green trees, which everywhere cluster on the slopes of the mountains, provide architecture with its light materials. Even the bridges are made of them, those pretty arched bridges with their many crutches of framework, which are to be found at every moment in the landscape.

"The houses are built in this way, with their plank walls arranged in any way, their paper partitions and the enormous roofs which give their silhouettes a curiously picturesque appearance. The pretty models exhibited in the "Japan section" at the Champ de Mars give a curious idea. Here is the farmhouse and its shed, both crushed under their thatched roofs like a Norman farmhouse; here is the palace of the ancient University of Tokio, almost hiding its galleries and balconies under a veritable monument of stepped roofs. Leaf through the prints: you will find the houses of the cities. There is nothing there to remind one of the cut-outs, the lacework, the contoured ornamentation, to which the architecture of wood lends itself so easily; and if by chance a frieze or a balcony is adorned with precious carvings, the whole is sober, and the general lines remain simple.

"Now come in; we are in the rooms. The furniture is reduced to a few things: shelves, chests; no tables, seats, or furniture; one squats, one sleeps on the floor mats. The same room is adapted to all uses. If the guests come, it is the living room; if the trays with saucers are brought in to serve dinner, it is the dining room; if the wooden bedsides are placed on the floor, pillows that are a little hard for a European head, it is the bedroom. But the sparkling decoration of Japan, its unforeseen caprices in which all the life of nature is scattered in spiritual bursts, blossom with their harmonious colours, their graceful designs, the paper hangings on the walls, the carpets on the floor, the panels on the shelves, and all those marvels of marquetry, precious wood, lacquer, porcelain, bronze, which you admire at the Exhibition: light, fragile luxury, which makes like a case of the house of boards where it is contained.

"Wait; the case will open. The thin walls slide into their grooves; a first envelope falls; what seemed like the wall becomes an exterior balcony; behind it again, panels of the second partition disappear. The light construction falls apart before your eyes. It is not enough to have galleries, balconies, terraces, which seem to go in front of wide horizons, and where painters like to group women, characters of all kinds, enjoying as dilettantes some beautiful landscape; here is that the open air, the sky, the populous aspects of the street, if it is in the city; elsewhere, the sea, the countryside, mingle by escapes their vast expanses with the intimacy of the interior.

"It would not be necessary here to break, like Lesage's hero, the vial in which the lame devil is imprisoned under a magic seal, to beg him to make the roofs diaphanous. Travellers tell of their astonishment at these houses, which undress familiarly and, in their open-air cages, offer hospitality to curious eyes without prudery. In this country, intimate life, instead of locking up its secrets with a shady jealousy, seems, from these widely open rooms, to smile amiably at passers-by."