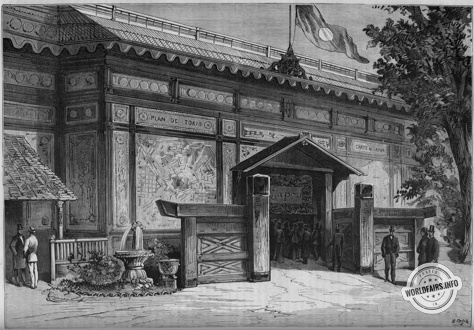 Placed between those of Italy and China, the Japanese facade simply represents the entrance to a modern bourgeois house.

A little overwhelmed by the neighbourhood, it is nonetheless remarkable for its severe elegance, which contrasts so sharply with that of the Chinese façade.

A massive cedar door defends the entrance, and two wall maps show the large panels on each side.

The door itself is held by two iron posts of the same species, and on each side has been erected a porcelain fountain, of graceful though strange form: the basin simulates a large shell of the tridacne kind, supported by a tree trunk; the basin is populated with fish and native amphibians, still in porcelain, and surrounded by painted pebbles such as are found in quantity on our pebbled beaches. These fountains are public and wooden cups fitted with reeds allow the passer-by to quench his thirst free of charge.

The wall map of the empire, in addition to its linear indications, tells us that Japan is divided into 35 departments and that it has 116 colleges, 103 modern language schools and 24,225 primary schools, for 34 million inhabitants.

Mr. Charles Blanc has assessed this facade in the following way. We believe we must quote his opinion because of the great authority he enjoys:
"The Japanese give us a sample of their architecture, which is remarkable and much noticed. The artists of Yedo have brought all the pieces from their island and assembled them on the spot. Never has this truth: that architecture is an essentially relative art, been more sensitive, more clearly expressed. There is in the Japanese door something primitive and refined at the same time. Two posts to support the leaves, two corner posts, two runners and two overhangs in joinery, these are the natural elements of the construction shown, without the slightest sophistication of the material. The timber is presented in its nakedness, thick, solid and dense; you can feel its strength and polish, you can count its veins. The ends of the jambs are covered with a green copper capsule, the colour of antique bronze, which protects them from rotting where the weather would begin to attack them. The ends of the runner are covered with a coating of the same copper, and, in addition, they are slightly straightened in the Chinese manner, but with a measure, a delicacy that announces men of taste. To straighten the ends of a doorway as if it were made of a flexible material, and without thickness, to turn up the corners of a door like those of a Chinese hat, would be a fault of taste, and the Japanese do not commit any of this kind, or that, at least, is very rare.

"To the extreme simplicity of this elegant structure is added a little refinement that one would not expect to find in such a rudimentary construction. The second bay, that is to say the opening of the Japanese exhibition, is surmounted by a pediment or rather a canopy whose sloping lines present an insensitive curvature, like those of the Parthenon pediment. This curvature corresponds delicately and in the opposite direction to the straightening of the eaves. The green bronze coverings are repeated as hinges on the door leaves at the level of the hinges. The two walls of the façade, to the right and left of the second bay, are decorated with two large coloured maps, one of which is that of Japan, the other a map of Tokio. The writing, serving in turn as an embellishment, completes the decoration of this curious entrance, just as it completes, in the mosques of Cairo and in the Alhambra, the ornamentation of Arab architecture.