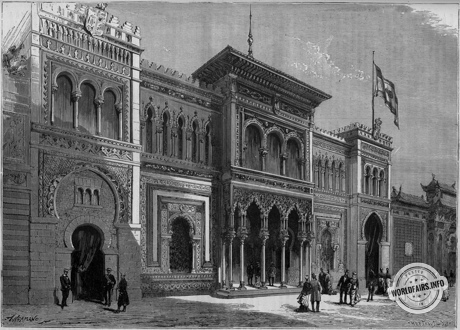 This facade is especially characteristic in that it reminds us that Spain does not have, has never had, architecture; it has, in the words of an eminent critic, taken, in no uncertain terms, the spoils of the vanquished, of the Moor, in a word; it has barely added to it, here and there, the product of borrowings made, with reservations, from Italy and France. It follows that the Spanish facade is an elegant specimen of this Moorish architecture, with its light columns supporting a whole facade, its horseshoe arches whose monotony is skilfully broken by the ogival arches of the intermediate galleries, from which its architects have cleverly borrowed the elements from the Alhambra, the Alcazar of Cordoba and various other buildings of the same period.

It paints its houses with the most vivid colours," said Victor Hugo, speaking of Granada. The paintings, the embossments, the sculptures, the earthenware that adorn the Spanish façade give an exact idea of what she did with her palaces. The architects of Madrid sacrificed nothing to fantasy: they were asked for a characteristic façade, and they provided it in good conscience and to their glory, after all.