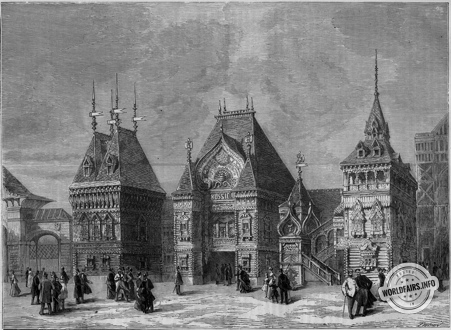 The Russian facade is made entirely of wood, like the Norwegian and Swedish facades, with excessively and elegantly elaborate ornamentation.

All in all, it is a great originality and therefore a great success of curiosity.

Forty metres long and five metres deep, it is an exact reproduction of the house where Peter the Great was born, in Kolomna, a town near Moscow, and the wooden staircase leading to the first floor is borrowed from the Kremlin. It is, in a word, the type of boyar's house, called terma, as opposed to the isba, the dwelling of the Russian peasant.

Wooden construction applies in Russia, say Messrs Lamarre and Léger, not only to villages, but to most rustic buildings; thus, on the main railway lines, the stations are made of wood; in the vicinity of the large cities, delightful wooden villas rise in the middle of forests or gardens. Wooden architecture has acquired a true national style in Russia and lends itself to a very elegant decoration; it suffices, to convince oneself of this, to compare the Russian facade with the Swiss chalets, whose well-known type is unfortunately missing from the Exhibition.

M. Viollet-Leduc, in his book on Russian art, says: "Without mentioning the poetic character of the national songs in Russia, or the Russian peasant's pronounced taste for music, it is enough to mention the particular research that presides over the decoration of his dwelling, his modest and unvaried furnishings, his simple and coarse fabrics. When travelling through the villages of Greater Russia, one is struck by the multicoloured, often charmingly light borders on towels, tablecloths, shirts and other products of the same kind of rustic work of the Russian villagers... The same characteristic ornamentation is found in the carts, sledges and boats of Russian peasants. The national clothing of both sexes bears a stamp of elegance; bright colours dominate, without offending the eye by too many bigarrhas; simple and even coarse in its elements, the Russian costume presents harmony and easily lends itself, with slight modifications, to the demands of the most refined taste."