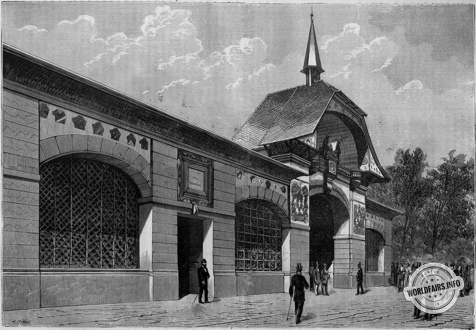 It seemed difficult to admit, says M. Brébant in the Rappel, that another façade than that of a chalet could represent, in the Avenue des Nations, the architecture of Switzerland, it is however what M. Jaëger, the architect charged by Switzerland, his country, wanted to indicate. The chalet is the dwelling of the mountains, but there are plains in Switzerland, and the house built by Mr. Jaëger is the dwelling of the plains; its façade is built in the style of the houses of the seventeenth century, of which there are still many specimens in the canton of Argovia.

In the middle of the terrace stands a clock flanked by two mannequins, known as Jacquemarts, covered in Burgundian armour, originating from the battle of Morat and on loan from the Zurich museum. Above the vault stands a bell tower at the bottom of which is inscribed the Swiss motto: One for all, all for one. This vault is supported by two enormous pillars on which are painted the arms of Switzerland, a crimson coat of arms with a silver cross, supported by two lions; below this coat of arms, one reads: Swiss Confederation, in French on the left side, in German on the right side

To the right of the large entrance door is a large bay closed by coloured glass, while to the left there are two bays separated by a small door; above the three bays are painted the arms of the twenty-two cantons of Switzerland, while the small door is surmounted by this motto of Jean de Muller: The politics of a free people means nothing if it is not inspired by patriotic devotion.