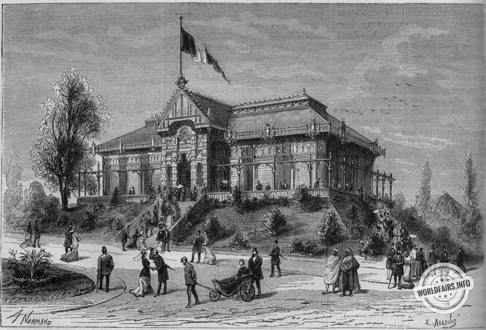 The water and forest pavilion is one of the charming things about the Exhibition. It is situated at the Trocadero, very close to the Pont d'Iéna. From the outset, it is difficult not to be struck by the elegant and ingenious appearance of its façade. All carved wood, light yellow in colour, it does not affect any display of luxury, and its simplicity is all the more seductive. The architect has used only the attributes of the forestry profession as ornaments: tools of all kinds, worked wood, panoplies, even various kinds of clogs.

The pavilion rises on a wooded hill, interspersed with rocks; it is reached by tortuous staircases that are reminiscent, in a small way, of the paths of the Vosges or the Pyrenees. The circular gallery opens up charming views of the Algerian villa, the Trocadero palace and the various horizons of this truly curious and pleasant park.

But let's follow the crowd, take the main staircase and enter the interior of the building.

The public does not fail to gather around a pedestal which supports a majestic boar, one of those solitary creatures whose dramatic existence our friend de Cherville has just told us about. Although it is well and truly stuffed, this boar retains its fierce physiognomy to the end of its life. We can guess that it must have been a nuisance and that it was for a long time, as Delille's emulators said, the pride and terror of the forest. The proof of this is provided on the spot: the pedestal bears on its four faces four heads of dogs wickedly put to death by this intractable acorn-eater.

After a just tribute to the boar, I advise you to take a long break near a display case containing a picturesque painting. It is a relief of one of our Vosges forests, executed with rare perfection. It represents the work of the Alsatian schlitteurs, the regular exploitation of a forest being cut.

I must admit that in front of this spectacle, which awakened in me memories of my childhood that are still alive, I could not help feeling a certain tenderness. Nothing is more striking than the spectacle of life in the open air; the schlitt paths consist of wide, gently sloping paths, on which are installed, like transverse rails, wooden sleepers marked with a notch at each end. The sledge, loaded with bark, dry branches or timber, and pulled by strong arms, slides along these grooves, and the schlitter is often obliged to brace himself against his burden and carry the whole weight of his body on his heels to check the rapidity of the descent.

There is nothing more charming, in the forest countries of the Vosges, than to see these sledges go by, separated from each other by intervals of 30 to 50 metres. The schlitteurs are hospitable; they willingly allow the tourists to take a seat on their sleds; a few handfuls of foliage thrown on the faggots provide them with a sufficiently soft seat, and onward with the crew! I assure you that the descent from the Champ-du-Feu to the Holzplatz, near Barr, is a journey worth another.

Whenever a torrent appears, these brave schlitt paths are continued by a horizontal ladder, thrown from one side to the other. The foamy water glistens through the bars and seems to laugh at your clumsiness. But the logs are so close together, the space so short, that the most inexperienced decide to try the adventure.

The job of these good people is not without peril. It sometimes happens that the load of the sleds is too heavy: the man does not manage to fight against the burden which drags him along; he is crushed in the twinkling of an eye; these accidents are not rare; a cross is erected at the place where the misfortune occurred, and all is said.

During the months of holiday, I lived this life of the woods with poor Théophile Schuler, who has left us a marvellous album of it; I questioned the schlitteurs and the woodcutters of the Vosges; I slept more than once under their forest roof. They live in small huts, nestled under the foliage and which, from a distance, look like a heap of logs of all sizes, piled up randomly, barely squared and connected by wooden pegs: these are the walls. A thin stovepipe running between the bark of the roof is the chimney. All this is blackish, mossy, eaten away by time and rain.

You have to bend over backwards to get into this room: the door opens with a simple latch, because you can imagine that there are no locks in these houses. A miserable cast-iron stove, a bed of dead leaves and heaped branches, a barrel of kirsch, a few sacks of potatoes, that is all the furniture.

The schlatter returns to his village only on Sundays; all the rest of the season it is in these primitive huts, reminiscent of the wigwams of Cooper's Redskins, that he rests his weary limbs. They are truly a primitive population, but robust and healthy, and still awaiting their historian.

Their work is most arduous, their sobriety exemplary. It seems that they are themselves aware of the poverty of their state, for certain popular songs mock it in a sad and charming tone...

Other relief shots also call for attention. Some of them show the various processes of reforestation of the mountains, one of the important issues of the day. Here is the relief of the Grande-Chartreuse and the Bourget torrent. Then the walls disappear under a varied display of wood and tools of all kinds: cooperage wood, lathe wood, resinous split wood, sabotage wood. A whole forestry course could be set up here.

What is most pleasing about this rich gallery is its sobriety and taste for ornamentation. The forestry administration has really distinguished itself; among other curiosities, one can consult with great pleasure the magnificent albums, filled with picturesque views and technical drawings. It goes without saying that the natural products of our forests are abundantly represented: the organisers of this exhibition have gone so far as to enclose samples of soil from the most diverse regions in flasks.

I do not want to forget to mention in conclusion the collection of useful and harmful insects: it is for the fact that, if one wanted to tell the biography of each one of these bandits or of these Montyon prizes of entomology, there would be volumes to write. The race of xylophagous beetles is formidable, and it is a curious spectacle to see with what industry these ferocious little artists cut the hardest woods into lace. There is such a piece of oak torn to its innermost depths that a Chinese or Japanese sculptor would not disavow.