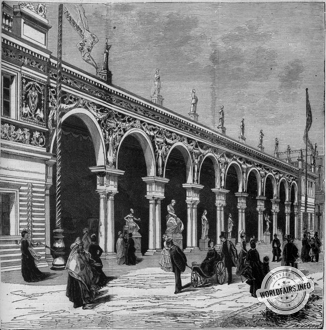 The facade that Austria-Hungary had built consists of a series of arches, the arches of which rest on coupled columns. The tympanums and friezes are decorated in grisaille.

Although this composition, because of its research and the disguised borrowings it seems to have made, from the point of view of decoration, to Italian style, is not entirely to be praised, it must be acknowledged that it does not lack distinction.

We believe, however, that this façade was built more as an artistic gallery.

The statues which crown the cornice, says Mr. Clovis Lamarre, are allegorical figures due to Mr. Baer, Austrian sculptor. Enormous masts, at the top of which float, on one side, the yellow Austrian standard with the black two-headed eagle, and on the other, the Hungarian colours, horizontal, red, white and green, stand at the two ends, where there are also offices for each section.

Statues of bronzed plaster or white marble have been placed under the arcades, some of which are very striking. Here is Kundmann's Goldsmith, a graceful young woman contemplating a ewer; Beethoven, by Zumbusch, a gigantic personification of this great musical genius. The hair is in disarray, the forehead is inspired, the artist is wrapped in wide, well-filled draperies. Albrecht Durer, the old master of the German school, by Schmidgruber: he is clad in a vast pelisse, with fur lapels; pensive under his long hair, he holds a canvas in his hand. In the centre, a full-length statue of the Austrian emperor is enthroned in the middle of a bed of flowers and shrubs; the sovereign has the type we know, with a high forehead and cheeks covered with thick sideburns; he is in uniform and has his hand resting on his sword; on either side, two allegorical women by Kundmann are holding out wreaths.

Other statues are placed to the right of the emperor, they are Michelangelo Buonaroiti, by Wagner, a magnificent white marble which represents the Italian artist dreaming, chisel in hand, and superbly wrapped in a mantle from which emerge powerful legs. Zumbusch's Prometheus, a somewhat tormented figure, shows us the ancient demigod on his rock; posted behind him, a pitiless vulture extends its head to gnaw at his liver. Finally, the sculptor Lax decorates the last archway with Science, a winged woman-genius, holding a crown in one hand and a torch in the other.

The interior panels are lined with architectural plans, and decorated here and there with a few busts. We particularly noticed the competition project of a monument for François Déak. It is a mausoleum of great character, surrounded by almost fantastic torches: Ex tumulo vita est, as the legend says. The architect

Eméric Steindlex designed a new opera house for Budapest and the restoration of Vajda-IIunxad Castle; Louis Ranscher, the Budapest teacher training college, a café-restaurant in Zurich, and the town hall in Grossenbain, Saxony.

In the frames of the architect Ray, the palace of the Hungarian railway administration and the town hall of Kecskemet, whose magnificent central tower surmounts a massive triple entrance, are especially admired; the overall view, which is very beautiful, is brightened up by a crowd of groups in native costumes.