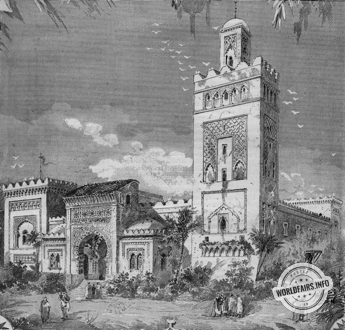 The Algerian pavilion at the Trocadero, a charming work by Mr. Wable, is characterised by its happy imitation of the minaret of the Mansoura mosque and the portal of the famous Sidi-bou-Médine mosque in Tlemcen, with its graceful frame of faience and arabesques. It remains for us to visit the interior and to examine the products exhibited there, a certain number of which we had already indicated at that time as being to be included in the galleries.

The middle of the Algerian palace is occupied by a courtyard, with an oriental fountain in the centre, decorated with exotic plants. This courtyard is surrounded by galleries with Moorish arcades gracefully cut out and framed with earthenware. One enters through a vestibule with a daylight dome, which filters the light and produces the most curious refraction patterns.

The walls of the galleries are covered with maps, plans, drawings and photographs of the major works carried out or in the process of being carried out in our colony; we note in particular the photographs of the drilling of artesian wells in the middle of the desert, with the aim, if not of fertilising it, at least of making it accessible to the traveller. Here are the instruments and devices that were used for this intelligent work, the tools of the sounder, the miner, the quarryman, for the Algerian soil is rich in mineral products, the exploitation of which seems to have been carried out in a serious and methodical manner for several years. There are some very nice trophies of indigenous weapons, but that is all. Firearms of indigenous manufacture, Kabyle to be precise, for the arms industry is entirely in the hands of the Kabyles today, are hardly worth anything except for the eye: an old piston rifle is much preferable in practice, and the proof is that the indigenous hunter prefers it.

Let us add a complete collection of domestic utensils, pottery, brassware, drinking and smoking; another of musical instruments; clothing made of cotton, wool, goat's hair and camel's hair: gandouras, burnous, haiks; multicoloured carpets, made of an innumerable quantity of pieces and valued at an even more considerable number of francs. Finally, let us not forget the Kabyle jewellery and bimbeloterie, mekias and khalkhals, in other words, wrist and instep rings, earrings, rings, etc., in plates and filigree, decorated with pearls or stones, coral, etc.; and all sorts of small utensils in wood and bone.

The geological and mineralogical collections, which are very complete, are perhaps the most interesting part of this exhibition. Here is the province of Algiers with its silver, lead, zinc, copper and iron ores, and its mineral waters of all kinds and temperatures; Constantine also possesses silver, copper, iron, lead, and in addition mercury, antimony, salt, white marble and alabaster; finally Oran exhibits samples of superb onyx, black marble, slate, various ochres and iron ores. The samples of magnetic iron ore from Mokta-el-Hadid must be mentioned separately, and the beauty of the marbles from Tilfilah, taken from ancient Roman quarries that have been happily brought back into use, must be emphasised. An alabaster stone from the tomb of Boabdil, King of Granada, is placed at the entrance to the vestibule.

The furs of the Algerian wild beasts also form an interesting collection, especially if we compare it with the collection of skins of goats, sheep, etc., and samples of wool, hair and various silks. We shall also mention a few stuffed animals, to finish with the animal kingdom. But the plant kingdom is no less richly represented. Cotton, of which we note some fine samples, flax and esparto grass represent the textiles (we know that esparto grass is also commonly used to make paper); many dye plants come next; then tobacco, liquorice, cereals, and finally a complete collection of all the wood species of Algeria. It goes without saying that a veritable army of indigenous vegetables and fruits parade before the eyes of the visitors; likewise squadrons of bottles filled with wines, liqueurs, oils and essences. An abundant variety of pasta completes, we believe, this part of the exhibition.

Let us not forget, however, the specimens of the works of the indigenous schools, and above all a small and very interesting collection of Roman antiquities, as well as the showcase containing ancient illuminated Arabic manuscripts on parchment: a real little treasure. This reminder done, it seems this time that we have not forgotten anything important.

Under the porch of the Algerian palace, or in the vicinity, beautiful specimens of the Arab and Berber or Kabyle races, under the guise of spahis and turcos, are walking slowly or meditating in a crouched position: this is the palace guard. This Algerian palace guard, whose arrival we announced at the time, has its tent a few steps away, near the Moorish café. It is a real African tent, made of thick camel's hair. Under this shelter, the natives who are not on duty meditate, smoke, play or chat without being distracted by the visitors who, for their part, need not hesitate to satisfy their curiosity: among the Arabs and Berbers, in given circumstances, hospitality is complete and the host is never indiscreet.