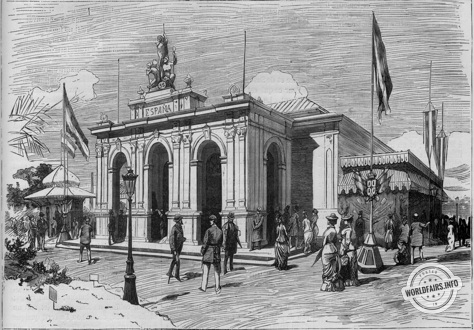 The pavilion that the general commissioner of the Spanish section, Mr. Emilio de Santos, had the happy idea of erecting in the park of the Champ-de-Mars, is located in that part of the park which extends from the Porte de Grenelle to the Pont d'Iéna, very close to the pavilion of the Principality of Monaco and in front of the special exhibition of the Society for the Relief of the Wounded. Built and fitted out under the direction of Mr. Albert de Quintana, who wanted to make it a little marvel and succeeded fully in doing so, the Spanish pavilion was not opened to the public until rather late (it was inaugurated on June 21), who made up for it as best they could by making repeated visits to it, the enthusiastic report of which they then spread in their own bosom.

In an outside gallery are exhibited various objects more or less related to agriculture, wickerwork, ropes, samples of forest products, and above all numerous samples of the various ores of which the country is still so rich, although the exploitation leaves something to be desired. But the visitor stops very little in this gallery. Woods, ropes, minerals, these are to be seen everywhere; but he has been told of the wonders of the interior, and he is anxious to enjoy them in order to bear witness to them on occasion.

The interior of the pavilion is divided, not precisely into two rooms, but into two distinct parts. In the first, the mining and especially the agricultural products themselves are exhibited, all the riches of a soil that would only need to be worked better to become one of the most fertile in the world. Cereals and olive trees grow here almost without the help of man. Almonds, liquorice wood, drugs and a thousand other products also come from the Iberian peninsula. All these products of Spain, and those of her colonies too, products of Catalonia, Andalusia, Extremadura, the Balearic Islands; products of the mines of San-Juan de las Abadesas; various products of the Canary Islands, the Philippines, Cuba and Puerto Rico, are arranged in the first part of the pavilion, in a perfect order for the study of the agricultural riches of this country, and in a picturesque and attractive way for the eye of the visitor. However, it is the back of the pavilion that attracts him irresistibly, for he can already see, through the three large arches that separate it from the part where he is, an orgy of light and colour flooding a Moorish fairy-tale setting.

This part of the pavilion has the air of an ancient chapel, but decorated in an eminently secular style and taste. On every side of the room one sees nothing but bottles, liquors and wines, whose curiously assorted colours form a pleasant pattern, skilfully traced on a rich tapestry. On the walls, around the pillars, on the ceiling, forming stalactites, one sees only bottles and always bottles. The ceiling is glazed, and under the windows, bottles full of yellow and red liquors have been attached, neck down, by means of wire holders, so that when the sun comes to strike them, the reflections passing through the liquors project the different colours around them, as they would do in church windows. These rays of coloured light strike the inclined glass panes, which reflect them and multiply the images they illuminate ad infinitum.

The effect is magical; the pen refuses to describe it; and only a work of art and patience at the same time could make it obtain from elements so singularly gathered: it seems that there are not less than 30,000 bottles contributing to this luminous decoration!

Let us add that, near the entrance of the pavilion, a young Spanish woman sells cigars and cigarettes and Spanish tobacco in all its forms to the visitors, at the right price, with a very pleasant smile on top of that.