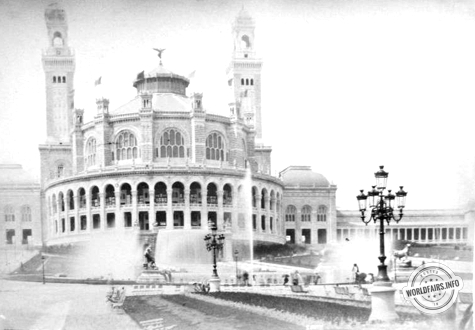 It has been so well understood that whether seen from below or above, it is equally pleasing to the eye.

Its masonry has 58,000 worked courses; its water falls from a height of 9 metres and gushes down seven steps before reaching the final reservoir.

We wanted to know the volume of water necessary for its daily supply; it is 3,600 cubic metres.

At first it was thought that pipes specially connected to the Ménilmontant and Rue de Lauriston reservoirs would suffice; this was not the case and a pump had to be established on the Quai de Billy to raise the water to the height of the upper basin of the cascade. Another advantage was that the overflow from the waterfall was channelled into large cast iron pipes, over the Iéna bridge and into the water supply system of the Champ de Mars.

At the four corners of the large basin, there are four statues in gilded cast iron: the Ox, by Cain; the Horse, by Rouillart; the Rhinoceros, by Jacquemart; the Elephant, by Fremiet.