Statues on the large façade - 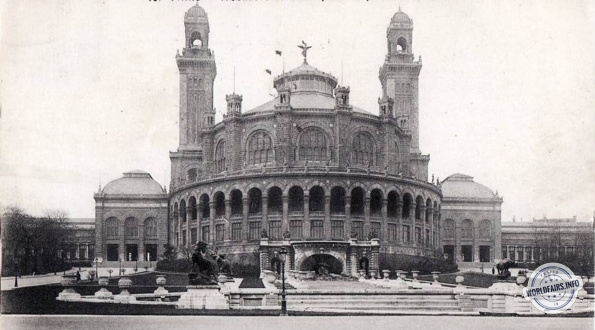 It is outside, at the foot of the waterfall, that one must stand in order to get a good view of the palace's superb façade.

It is only from there that one can see at a glance the six statues, also in gilded iron, which are on the six pedestals of the terrace: Europe, by Schœneverch; Asia, by Delaplanche; Oceania, by Moreau; North America, by Hiolle; South America, by Millet, and Africa, by Durand.

Finally, the thirty compositions on the upper terrace, known as the Terrace of Statues, are listed below:
Architecture, by Salds; - Music, by Schrœder; - Mechanics, by Roger; - Photography, by Tabaré; - Goldsmithing, by Warmer; - Metalworking, by Vauréal; - Physics, by Salre; - Agriculture, by Aubré; - Painting, by Barthélemy; - Geography, by Bourgeois; - Ceramics, by Gambard; - Botany, by Baryanet; - Navigation, by Ghervet; - Chemistry, by Chevalier; - Forestry, by Chrétien; - Ethnography, by Clerc; - Mineralogy, by Saint-Jean; - Sculpture, by Vital Dubray; - Mathematics, by Cambos; - Fish farming, by Eude; - Printing, by Felon; - The fabric industry, by Gautherin; - Medicine, by Gauthier; - Astronomy, by Stass; - Telegraphy, by Lavigne; - Military art, by de la Vingterie; - Education, by Lenoir; - Metallurgy, by Durand; - Furniture industry, by Millet de Marcilly; - Civil engineering, by Peney fils.