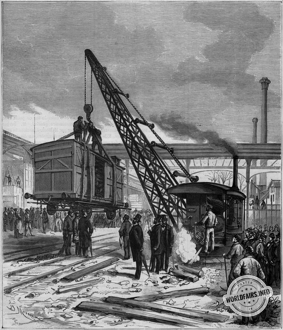 The crane is an ingenious combination of the winch and the pulley, used to lift heavy loads to transport them, thanks to the pivot on which it turns, to a great distance. Industrial progress, after having substituted hydraulic power for human muscle power in the operation of the crane, has ended up, without consenting to the abandonment of either of these two engines, by applying steam. This application was carried out in England by Sir W. Armstrong, who had previously worked in the field. Armstrong, who had first applied hydraulic power, not to mention various improvements in construction, and in France by Messrs. Claparède and others. Useful modifications, suggested by experience, have since been made to this machine; the Voruz crane, which we saw in operation at the Exhibition, near the Rapp gate, has benefited from all these improvements.

This machine, very simple in construction, weighs 35,000 kilograms. It consists of a central iron pivot weighing 9,000 kilograms, enclosed at a depth of 5 metres in a masonry mass. The plate which ends it at its exit from the ground supports on one side a steam boiler, on the other the lever, and in the centre the various parts of the winch, which can be operated by manpower or by steam, depending on the case: by manpower with the help of a simple crank, or by steam activating two pistons, the cylinders of which are placed on the side of the masonry, which act on cranks which set in motion the shaft of the winch. A huge chain slides over cylinders along the boom and is wound onto the winch.

The lifting jib of the Voruz crane has a range of 7.5 metres, so that by picking up a loaded wagon weighing 10,000 kilograms at 7.5 metres to the right or to the left, as we have seen it do, it can carry it an equal distance to the opposite side, thus making it travel a total of 15 metres in space; but it can also set me down on the way, hold it suspended or return it to the place where it was picked up, according to the mechanic's fancy.

It is indeed a very powerful and docile instrument.