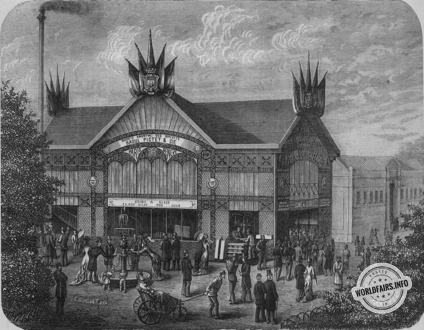 The greatest novelty of this year's Universal Exhibition is undoubtedly the ice-making machine of Messrs. Raoul Pictet and Co. It supplies 24,000 kilos of ice of remarkable purity daily, and there is not a visitor to the Champ-de-Mars Palace who has not stopped with interest to see it in operation and to taste its products.

Today we learn that a company is in the process of being formed to exploit the processes of Messrs Pictet et Cie in the neighbouring departments of the Seine, Seine-et-Oise and Seine-et-Marne.

This company has also acquired the rights to the patent taken out by Mr. Martin, an engineer, for a new cold and dry air machine operating with atmospheric air and intended for the transport and preservation of foodstuffs.

The rapid production of ice, the preservation of meat, fish, butter, fruit, vegetables, etc., are questions of the highest social interest, since they are linked to the ever so exciting issue of cheap public food.

The exploitation of these two patents seems to us to constitute absolutely certain elements of success for this new Company, which is taking the title of Compagnie des glacières de la Seine, and which is currently publishing, in the major Paris newspapers, the announcement of the issue and the conditions of the subscription of the securities it is issuing.


The use of ice is so widespread today and its consumption so abundant that its artificial manufacture has come to constitute a real industry.

Next to the Toufflin mill, in front of the military school, the Raoul Pictet company had installed its ice-making machines in a vast pavilion; the interest they inspired in the public, which did not wane for a single moment during the Exhibition, was so great that people queued up to watch the production.

The reader, by examining the engravings which we shall place before his eyes, will get an exact idea of the way in which ice is obtained and of the work required for its manufacture; he will admire in particular the machine which produces one thousand kilos per hour and which is in operation in New York.

As for the Manchester Skating-Rink where the public skates on real ice produced by the Raoul Pictet machines, - we give an exact reproduction of it - it is a marvel which is like a fairy tale and which will be admired by all.

Let us now give some details on the manufacture of ice and on the various uses to which refrigerating machines are put.

We borrow the interesting details that we are going to read from an interesting notice by Mr. Paillon, civil engineer:
"Everyone knows that refrigerating machines are not only used to produce ice, but that a host of industrial operations, today difficult, would become easy if it were possible to produce cold air at low cost and in abundance. - To give just one example, ask a brewer what he would willingly pay to keep his cellars at a low temperature in summer. How many supplies could be preserved in our markets if we could organise cellars as annexes where the temperature would be above 0°!

"Wouldn't the cold obtained at low cost replace the action of heat (in the sense of raising the temperature) in many cases?

"Instead of evaporating, for example, the sweet juices in sweets, what would prevent them from being partially frozen and the water from being removed as a block of ice?

"But let's not emphasise the importance of this question, which everyone appreciates.

"The means employed nowadays to produce ice or cold air can be divided into two categories:
"1° Chemical means;
"2° Physical or mechanical means.

"1° Chemical means make use of the lowering of temperature determined by certain reactions; and for example, certain salts and acids are brought together, thus forming what are called refrigerating mixtures.

"2° There remain the physical or mechanical means; and here we find several processes in presence.

"When a gas is strongly compressed, its temperature rises, and this is what the little experiment with the atmospheric lighter shows.

"Suppose, therefore, that you compress the air to 5 atmospheres: it is clear that this air will take on a fairly high temperature. At that moment cool it by a stream of cold water at room temperature, and you will have air at 15° for example. This air will have remained at the pressure of 5 atmospheres, if you have introduced a small additional volume, necessary to correct the contraction due to cooling.

"Now suppose that you were to reduce this volume of air to the pressure of 1 atmosphere (five times less, therefore). - The temperature will immediately rise from 16° to a number of degrees below 0.

"Repeat these operations in a continuous manner; and there you have a constant source of cold air organised by a simple expenditure of mechanical labour without the aid of any special agent.

"With cold air, you can easily freeze, if it is ice that you need.

"This is therefore a very simple process; and it is to this general method that the Windhausen, P. Giffard, etc. machines are linked. - The principle is obviously very attractive, since no reagent and no expensive substance are necessary.

"Unfortunately, gases occupy very large volumes; their specific heat is low; and it is impossible for the temperature to drop too low in a gas pump or machine without all lubrication becoming impossible.

"For these reasons, and although the mechanical theory of heat proves that the same number of kilograms must always be expended to produce a positive or negative calorie; for these reasons, we say, the efficiency or useful effect of compressed air refrigerating machines, then expanded, has been found to be low until now. The work losses of the compressor apparatus are added to those of the expansion apparatus; and this process, so rational at first sight, seems to be economic only in very special circumstances, where the motive power would cost very little. It is not even possible to see that in the future very practical means will be found to overcome this somewhat fundamental difficulty.

"Perhaps one day we will be able to liquefy air (i.e. oxygen and nitrogen), but under what pressure and at what temperature?

Let us say straight away that, since the time this notice appeared, M. Raoul Pictet has found the means to liquefy and even solidify oxygen and hydrogen.

"If, on the other hand, one uses a liquefiable body under a relatively low pressure and a temperature that is not too low, the problem is enormously simplified, because the mechanical and calorific effects to be produced apply to much smaller volumes.

"The same number of kilograms is always required for a more efficient apparatus, and hence there is a considerable saving.

"Liquids absorb latent heat as they vaporise, and naturally borrow it from the walls of the vessels that contain them. When a drop of ether or a very volatile liquid is poured on the hand, one immediately experiences a sensation of cold. Why is this? - Because the ether, as it vaporises, withdraws from your hand a certain amount of caloric energy which is used to produce and maintain the gaseous state and which passes into the latent state.

"The number of calories necessary to hold 1 kilogram of ether in the vaporous state is what is called the latent caloric of vaporization of this substance; and the reason for this name is that this caloric is not sensitive to the thermometer.

"Mr. Raoul Pictet chose anhydrous sulphurous acid, whose specific heat is about that of water, which boils at 12° below zero at ordinary pressure, and whose latent heat of vaporisation is about 94. - Its chemical formula is SO3. This anhydrous acid does not attack metals.

"To prepare sulphurous acid by burning sulphur would be inconvenient; for one would at the same time obtain a drag-out of nitrogen from the air, of uncombined oxygen, and of sulphur flower, sulphur being fusible at a rather low temperature and volatile.

"It is preferable to operate by treating sulphuric acid, SO3, with an oxygen-hungry substance such as copper or coal. With copper, for example, one produces the reactions expressed by the equation:
Cu+2SO3, HO=CuO.SO3+SO2+2H0. - With coal one obtains sulphurous acid, carbonic acid, carbon monoxide, and traces of carbonaceous hydrogen.

"To liquefy sulphurous acid, it is passed through a U-tube immersed in a refrigerant mixture of crushed ice and sea salt; or it is compressed to 3 atmospheres at ordinary temperature.

"The liquid sulphurous acid is colourless and very mobile; by evaporating suddenly it produces a considerable drop in temperature to freeze the mercury (which freezes at -40°). All the more reason why it is easy to freeze water at 0°.

"Not only does liquid sulphurous acid not attack metals, but it is also a lubricant, and metal pistons and gaskets can therefore be used with it without any inconvenience.

"The operation of the apparatus requires no other expenditure than that of mechanical labour and the small quantity of sulphurous acid necessary to compensate for leakages.

"The cost price of the ice is about Ofr. 01 per kilogram, according to Mr. Pictet.