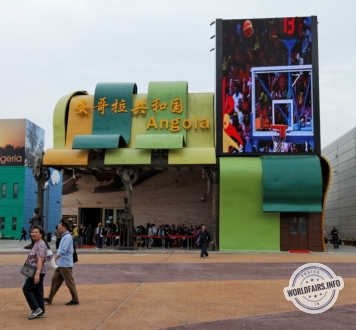 The pavilion's facades are adorned with African wood carvings to exalt the national character of Angola. Using modern exhibition facilities, the pavilion displays sculptures and paintings of national character that represent the inseparable links between Angola and water, and explores the sustainability of urban development.

- Visitors can experience first-hand the life of indigenous Africans through the thatched cottages on display in Angola.

- Through a curtain of water mist, one can discover a man-sized totem pole that is made entirely of leaves and keeps spinning.