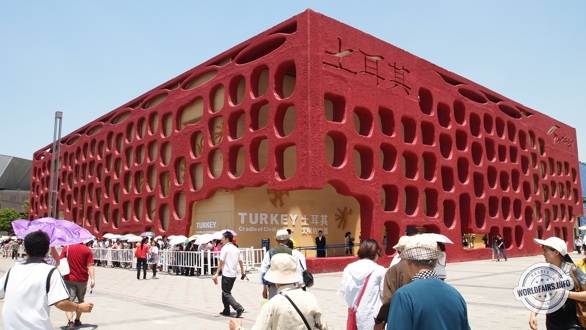 The pavilion is surrounded by two layers of outer walls decorated with ancient frescoes and rock drawings, an idea inspired by the settlement of Anatolia, one of the world's first discovered settlements. Inside, it presents three themes: "dreaming back to the past", "working in the present" and "thinking about the future", explaining fragments of history with the help of real images and objects and leading visitors through a "Turkish dream labyrinth".

- In the centre of the pavilion, a 360° circular screen shows thematic films that link Istanbul and Shanghai; inside, you feel as if you are walking through the streets of Istanbul.

- The pavilion organises cultural activities: performances, a parade of traditional Anatolian costumes and a show by the military band of the garrison cavalry.