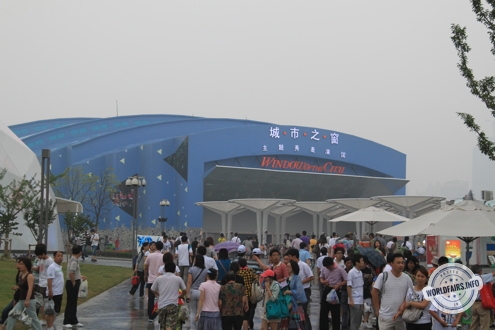 This pavilion is located in the group of thematic pavilions in Zone B. Its exhibition space consists of two symmetrical spirals, on top of which visitors can see the spherical crown with a diameter of 32 metres. Inside the pavilion there are five exhibition rooms ("Urban Expansion", "Crisis", "Blue Globe", "Solution" and "We Have Only One Earth") which tell the story of urban development, the ecological problems caused by overdevelopment, and the awareness of human beings of these issues and the efforts made in this regard. The interaction with the exhibits allows visitors to understand that the origin and solution of these problems lie in the city.

- The "Blue Globe" is a giant spherical crown with seamless projectors and display technology that creates the impression of looking down on the Earth. The projected scenes tell in a poetic and metaphorical way about the relationship between the earth and the city, urban development and human behaviour.

- We only have one Earth" is a wonderful show projected on the dome. It tells the story of the interaction between the city, the earth and humanity.