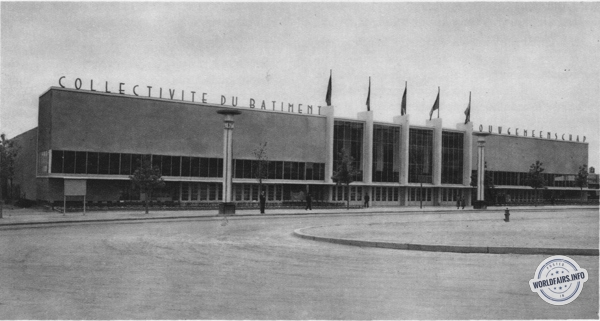 Built on the initiative of the Belgian Society of Modernist Town Planners and Architects, the Pavilion of the Building Community occupied a site on Avenue Charlotte, next to the Palais de l'Automobile, with a frontage of 83 metres and a depth of 30 metres.

Designed in the modern style, the building consisted of a central part with an entirely glazed façade and two wings, each divided into two sections. The whole complex thus consisted of five sections, each of which was divided into stands. These sections were
The structural work, which included all the documentation relating to the building site equipment: bricks, mortars, concrete mixers, etc;

Hygiene, which was concerned with sanitary installations, heating and ventilation: in particular, the most recent models of bathrooms could be seen there, as well as a cellar shelter against gas, etc;

Illustrated with photographs of modern architecture and enhanced with new architectural contributions, the whole was a credit to the building industry, the jewel in the crown of the Belgian economy.

On 28 May 1935, Minister Van Isacker officially inaugurated the Pavilion. The ceremony was honoured by the presence of Mr. Adolphe Max, Mr. Caspers, Mr. Fonde and many personalities from the world of architects and construction.

It took place in the vast hall decorated with a gigantic world map by the cartographer Léon De Moor.

Mr. J.-F. Hoeben, president of the section, was the first to take the floor to thank the Minister of Economic Affairs for the high patronage he had kindly granted to the Building Community.

The Minister took up the famous saying "When the building industry is going, everything goes", and explained its meaning and scope, stating that the building industry could indeed be considered to be the criterion for the economic prosperity of the country. He had a kind word for the makers of the Pavilion and assured them of the solicitude of the Belgian Government.