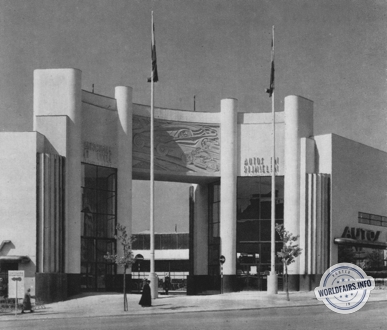 The Belgian Automobile and Cycle Industry had a pavilion located opposite the Grand Palais and the water rooms, at the corner of the Avenues du Centenaire and Charlotte, covering an area of 3,500 m2.

This pavilion, whose remarkable style and presentation were due to the designs of architect Henry Profiter, housed classes 102 and 103. It consisted of two front halls, one facing Charlotte Avenue for passenger cars and coachwork, which also contained a curious retrospective of these; the other, facing Centenary Avenue, for heavy goods vehicles, motorbikes and bicycles. These sections, decorated with stained-glass windows by the glass painters Walther Vosch and Jean Timmermans after cartoons by the painter Mark F. Severin, were connected at the front by a monumental porch, formed by a bas-relief by the statuary War van Asten, and at the back by a circular gallery housing accessories, spare parts, tyres, etc. This circular arrangement left room for an interior garden, which gave the whole a clear and attractive appearance. The 33.60 m long shop windows extended their full length without any pillars or columns.

Electric road traction was the first attempt to mechanise road vehicles until 1902, when the internal combustion engine, invented by the Belgian Lenoir, revolutionised construction methods.

In Belgium, at a Cycle Show in 1895, two cars were exhibited that had been bodied in Belgium but had a Benz petrol engine of German origin.

At the beginning of the 20th century, Belgian manufacturers started building chassis and Belgian coachbuilders worked hard to give the new vehicle a body that suited its construction, purpose and speed.

The war brought a new revolution in chassis construction. From 1920 onwards, the use of the private and industrial car became more and more widespread.

Today, there are 25 motor vehicles per 1,000 inhabitants in Belgium.

The car brings in an average of 1 billion francs each year to the Treasury, i.e. 1/10 of the total Belgian budget. From this figure, the State diverts 300 to 325 million francs per year for road maintenance, which is used for all other vehicles.

On the other hand, Belgian motorists spend an average of about 3 billion francs a year on the purchase, maintenance, servicing and use of their cars and lorries, which provides a livelihood for almost 3,000 companies and several tens of thousands of workers and employees.

Belgium could not think of manufacturing in large series, which is the only way to make money. The minimal importance of the Belgian market, which only absorbs 10,000 to 20,000 cars per year, and the existence of customs barriers abroad have obliged manufacturers to reduce their cost prices by other means: purchase of foreign licences or assembly using selected components supplied from abroad. This situation has led to the development of factories in Belgium for the manufacture of wheels, springs, electrical equipment, headlights, windows, gears, foundry parts, special cloths, tyres, etc., which now represent the real Belgian car industry.

But it could not have lived on the needs of the current national construction alone. It therefore sought and found a lucrative outlet in the large assembly plants of foreign brands installed in Belgium, which also use a considerable number of Belgian personnel.

A recent Belgian-American agreement has further developed the activity of these factories.

However, one Belgian industry, which had a worldwide reputation and was once flourishing, the bodywork industry, did not benefit from this recovery. Mass production has taken away from Belgian coachbuilders any possibility of doing business with the common clientele and has left them with only opulent domestic buyers and a few foreign shoppers, for whom Belgium has remained the part of the great luxury coachbuilding of unequalled taste.

The history of motor sport in Belgium can be summed up in a series of events, of which the main one is undoubtedly that of the Francorchamps circuit, the most beautiful in Europe, with short and wide bends, downhill and uphill stretches, long straights and allowing very high average speeds, since some cars covered the 14 km. 864 of the course at an average of 155 km. 102 per hour.

Every year, the events organised by the Royal Automobile Club of Belgium attract cosmopolitan crowds.

The Belgian 24-hour Grand Prix brings together some forty competitors each year, including the most famous drivers, driving the latest machines.