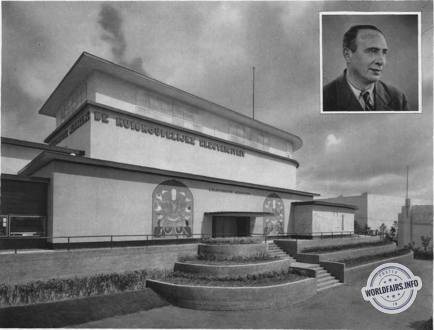 Built on the plans of the architect Eggericx, the Household Electricity Pavilion was located in one of the most attractive corners of the Exhibition, on the Avenue des Athlètes, halfway up the Rose Garden.

It covered an area of 1,500 m2 and was built on the initiative of the Union des Exploitations Electriques en Belgique, which groups together all the private electricity exploitation and distribution companies in the country.

The aim was to put before the public, notably through the participation of Belgian manufacturers of domestic electrical equipment, all the appliances, large and small, which must be part of the equipment of a modern home. Places were also reserved for manufacturers of large electrical equipment, whose reputation extends beyond our borders, as well as for the Union des Exploitations Electriques en Belgique and industrial power stations.

The exterior decoration of the Pavilion consisted of two distinct sets: one composed of four representations of Brahma, flanking the two side doors, the other consisting of a frieze representing "electric comfort" opposed to ancient slavery, the work of the painter E. Salkin.

Inside, panels and diagrams introduced visitors to the basics of electricity and showed them all the regions of the country that have already been electrified and which amount to over 99%. The visitor could also see how the price of electricity has fallen since the devaluation of the franc.

The many ways in which electricity can be used and the services it can provide in households were highlighted by a collection of articles and appliances of all kinds: electric cookers, storage water heaters, refrigeration cabinets, baths of all models and prices, etc.

A series of models of flats of all sizes, entirely electrified, was also on display.

Finally, in a bold and curious initiative, many appliances were shown in operation and practical demonstrations were given by 22 home economics schools from the Brussels area, which thus had the opportunity to familiarise themselves with the handling of the appliances, which was extremely simple.

One part of the pavilion was occupied by an electric rotisserie where the public was allowed to taste food prepared with electricity, while following the cooking operations with their eyes.

Every day, throughout the Exhibition, lectures and demonstrations on electric cooking attracted large audiences. They were given by Mr. Vermeren in French and Flemish.