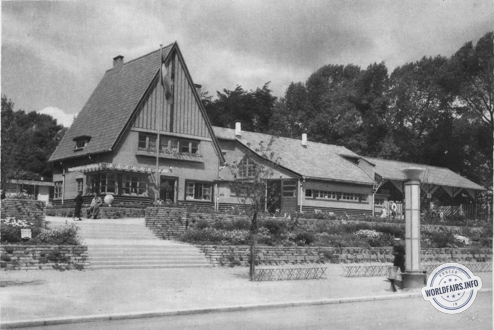 The Model Farm was primarily a demonstration farm. The aim of its creators was to show, in a type of small-scale farming, the many advances made in the rural dwelling and its outbuildings, the choice of materials and their layout, as well as in the most modern methods of intensive farming, poultry farming, market gardening, etc.

Agricultural education in Belgium has expanded considerably: the State Agronomic Institute in Gembloux; the Free Agronomic Institute annexed to the University of Louvain; the middle schools of Huy, Vilvoorde, Ghent, Leuze and Avelghem, are all remarkable institutions. Several provinces also opened agricultural schools to the extent that in 1929, 807 schools had a total of nearly 18,000 pupils and a budget of more than 33 million francs, i.e. approximately 2/5 of the budget of the Ministry of Agriculture.

Thanks to them, our farmers find new technical resources, allowing them to further improve the conditions of exploitation of the soil.

The Agriculture Pavilion was inaugurated on 23 May by Mr De Schrijver, Minister of Agriculture.
The government representative was received by Baron Albert d'Huart, Vice-President of the Senate and President of the Agricultural Group, and by Senator Mullie, member of the High Council for Agriculture, who welcomed him, the former in French and the latter in Flemish.

The Minister thanked them and stressed the importance of agriculture in the Belgian economy.

He then visited the stands at length and toured the Model Farm, which was honoured by Mr. Graftiau, President of the Commission for the Embellishment of Rural Life.