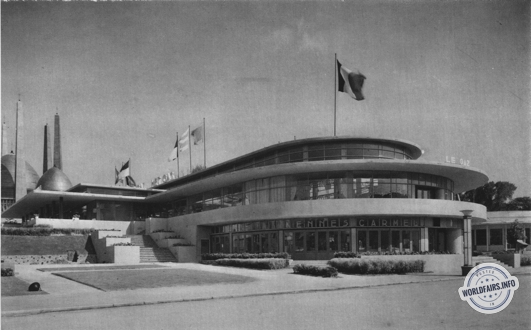 Built on the initiative of the Belgian Gas Association "Société Technique de l'Industrie du Gaz en Belgique", according to the plans of Mr. Verwilghen, architect-engineer, the Gas Palace was located along the Avenue des Frondaisons, at the corner of this avenue and the Avenue des Belges.

It was an oblong building in a sober, modern style, a sort of immense glass-walled vessel with an interior surface area of approximately 2,500 m2 and with stands totalling an area of almost 1,700 m2.

A spacious restaurant, with two terraces, one covered, the other in the open air, occupied the part of the Palais opposite the entrance staircase.

In the centre of the hall of honour stood a high relief with four faces, the work of M. Xhrouet. One side of the monument recalled that it had been built on the initiative of the Belgian Gas Association; the other three were dedicated to Van Helmont (1577-1644), author of the first "treatise on gases"; to Minkelers (1734), inventor of gas, and to Lenoir (1859), inventor of the gas engine, all three Belgians.

The interior decoration was fortunately done by Mr. De Vlamynck.

The Palais du Gaz housed the many presentations of Group XIV, i.e. the domestic and industrial applications of gas. Almost all the appliances were in operation before the visitors' eyes. This was particularly true of the restaurant's kitchen.

In the basement, the industrial applications of gas were presented in graphics, photographs, dioramas and models of carbonization furnaces.

In the main hall, visitors could see the economic importance of coal distillation. The role it plays in safeguarding Belgium's coal resources was highlighted.

A large illuminated map showed how gas distribution is organised in the country. A family tree showed the prodigious series of by-products of coal distillation which provide agriculture, the chemical industries and national defence with the bases they need. One tonne of coal yields on average 300 m3 of gas, 70 kg of coke, 50 kg of benzol, ammonia sulphate from which a multitude of substances are derived. It should be noted that more than 3,000 industries use gas and that there are on average 7 heating processes to which gas is applied in each of these industries.

On the ground floor, gas appliances for domestic and industrial use were exhibited: fireplaces and radiators, unit heaters, bath heaters, washing machines, refrigeration cabinets, kitchen appliances for households, large appliances for collective kitchens, ovens for bakeries, biscuit and pastry shops, deep fryers, vats for confectionery, ovens for firing and decorating porcelain and earthenware, ovens for the heat treatment of metals, blowtorches for glassmaking, etc. A car engine equipped for gas operation, and cylinders for compressed gas completed the presentation.

A curious retrospective exhibition showed a collection of meters, heating and lighting equipment from 1835 to 1935; the visitor could see the machines used in the past and the progress made in this field.

The visitor could not fail to be impressed by the importance of a fundamental industry both in its own field and in that of related industries. He realised that gas has become, in all fields of technology, the most valuable fuel of all that it has long been in the domestic field.