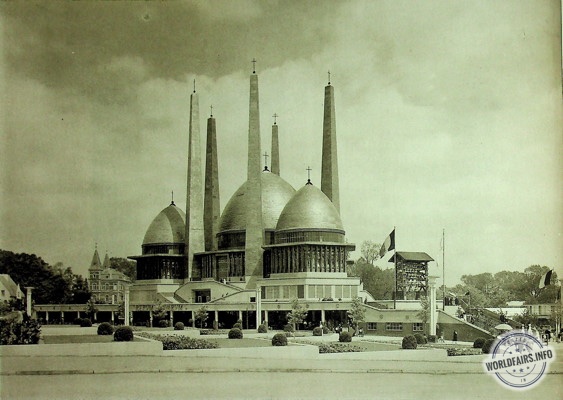 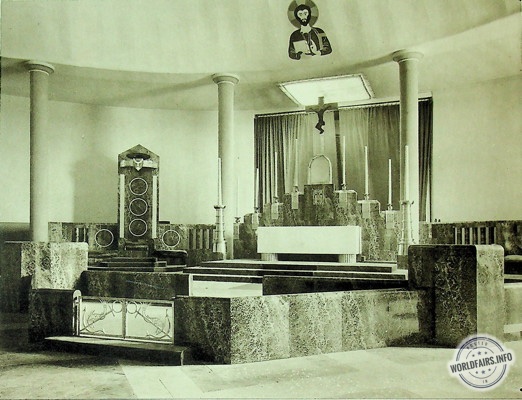 It occupied a triangle of almost 9,000 m2, facing the Esplanade des Grands Palais; the work of architect Henry Lacoste, it included a church dedicated to Saint Paul, where services were held, an exhibition hall, and reception services.

The church was 31 metres in diameter; the central dome, made of gilded copper, was 35 metres high. It was flanked by three smaller domes. The whole was dominated by six obelisks that soared to the sky.

The metal frame weighed 700,000 kilos; wide staircases led to the monumental portals. The figures of 144 Belgian saints, in embossed and enamelled copper, adorned the outer rim.

In one of the chapels was a beautiful Christ by Jules Reynaert, carved in solid wood; the stained glass windows had been donated by several renowned master glassmakers.

In another chapel, in the centre, there was a marble "Portor" altar, intended for the abbey of Tongerloo and designed by the architect Jules Ghobert, and, on the sides, reproductions of the tombs of Godefroid of Bouillon and Baldwin of Constantinople in Jerusalem.

The first floor of the palace was devoted to the works of Catholic life. In the centre, a Byzantine-style Christ the King painted on the ceiling showed that all works converge on God.

All around the Salon d'honneur, the virtues of Justice, Peace, Goodness, Righteousness and Firmness seemed to stand guard.

One of the central rooms was decorated with a portrait of Cardinal Archbishop Van Roey, by Corthals; another with a bust of Mgr Mercier, by Mascré.

A carillon with 34 bells, the largest of which weighed 400 kilos, stood at the front of the building.

The church was blessed on 2 May by His Eminence Cardinal Van Roey, who was received by Mr Carton de Tour-nay, President of the Board of Directors.

The official inauguration took place on 8 May, in the presence of the Exhibition authorities and a large crowd.
After Messrs Carton de Tournay and Father Rutten had thanked the Exhibition organisers for the help they had given to the building of this Palace, Mr Max took the floor:

The Mayor of Brussels said, "If we have given you all the facilities we wanted, it is because we felt the importance of your participation and were certain that you would do something very good. This participation has a considerable moral character and fortunately highlights the remarkable effort of your social works. Whatever one's political or philosophical views, one can only admire the achievement you have just completed.