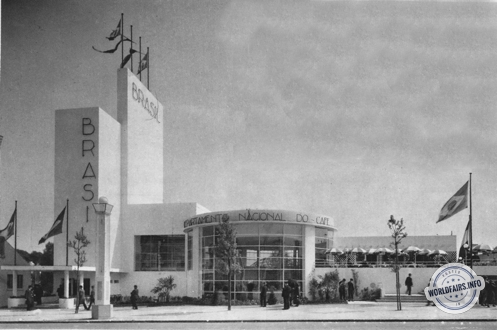 The Brazilian Pavilion stood on Avenue du Gros Tilleul opposite the Dutch and Chilean pavilions. It was a large white building, with straight lines dominated by two volumes of walls, built in the form of a tower and on which the Brazilian flag flew.

This pavilion covered an area of 1200 metres; the exterior appearance, completely modern, the interior distribution, the decoration, the layout, indicated that the architect, our compatriot A. Barrez, had designed his work according to its purpose. The dominant colour, white, was nicely contrasted with the green and yellow lozenges of the national colours, which were found in the parquet flooring. Letters, illuminated in the evening with green neon, indicated the "Brasil" pavilion from afar.

The building consisted of five halls; at the entrance, the trend of the Brazilian participation appeared, exclusively dedicated to its national coffee industry, as was recalled by an inscription on the pavilion's pediment.

In this first room, photographs and glass cases showed all the varieties of coffee grown in the great South American Republic. In an adjoining room, a huge machine, operating before the public's eyes, was used to de-stone, de-dust and roast the green coffee. In addition, there was a huge tasting counter, built in a baffle shape.

The light green of the woodwork, the brightness of the walls, the gleam of the steel bars and the huge percolators; the emerald light falling from a large stained-glass window, everything, down to the uniforms of the waitresses, gave this room a modern and inviting appearance. The success of this free tasting was very great, as one can imagine. On certain Sundays, more than fifteen thousand cups were
more than fifteen thousand cups of coffee were poured.

The ten columns which supported the vault of this room were made of high glass cylinders superimposed, and containing roasted coffee. Diffusers concealed in the walls allowed visitors to hear interesting talks. The walls were decorated with photographs and diagrams, showing the worldwide importance of the export of Brazilian coffees.

Another room, furnished with tables and seats, was reserved for consumers who wanted to sit down. For a small fee, coffee was available here, prepared in a variety of machines and according to a dozen recipes. This patio led to a terrace shaded by green and yellow parasols. Sheltered from the heat of the sun, one could enjoy (as King Leopold III did during his visit) an iced coffee while watching the crowds of people milling around the avenues of the World's Fair.

The entrances and exits of this remarkable pavilion were also arranged in the most practical way. There was an office set up by the Coffee Trade Union, as well as an information service run by Mr. Ernest Gdetcke, technical delegate of the Commercial Museum of the National Coffee Department of Rio de Janeiro.