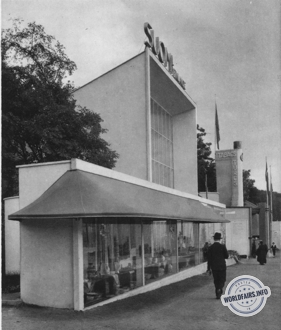 The pavilion was designed by Mr. Hytonën and Mr. Luakonen. The building covered 200 square metres and took the form of a large white block, set against a green background, on the outskirts of the Pavilion of the City of Rome. A flagpole, similar to the one the Scandinavians plant at the threshold of their homes, raised the Finnish flag high, a blue cross on a white background. And the façade was a huge glass roof - so that from the outside, passers-by could see the entire interior of the pavilion.

The main part of the pavilion was a large horseshoe-shaped room decorated with the coats of arms of the nine Finnish provinces. The floor was made of fine plywood; on the walls, the architects had drawn nine synthetic frescoes, summarising the picturesque and architectural aspects of the regions of Finland. It was above all tourist and cultural Finland that was to be shown, and a few symbolic images evoked life in these regions, which are still so little known: a sailing boat, a canoe, an archipelago, a tree, an athlete in a race, a lynx, a bear, a fisherman casting his nets, a deer, a peasant woman leaning towards the land she cultivates - all of these were precise and schematic visions of Finnish life and its particularities.

Skilful photomontages, in which the disorder was an effect of the most skilful art and taste, showed the joyful life of the country's beaches, the splendour of the waterfalls, the stride of the runner Nurmi, the glory of his homeland, the timber-loading ports (the one in Ukras is the most important in the world), the cathedrals, the cloisters and the great schools; workshops, sawmills, warehouses; snowy landscapes from Lapland to the northernmost reaches of Finland.