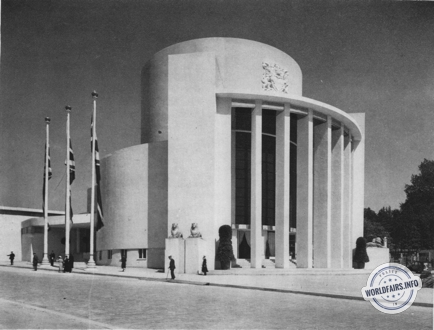 The sentiment that guided British participation in the Brussels Exhibition was briefly but clearly expressed in a bilingual inscription flanking the entrances to the central courtyard: "To the Belgian People, this pavilion is dedicated in recognition of a century of friendship".

The design and plan of this monumental pavilion marked, in a way, the beginning of a new concept in exhibition architecture; its location at the corner of the junction of two of the main avenues dictated, to a certain extent, its layout; it was also intended to have a "dignified and stable" appearance, characteristic of British achievements, while at the same time
the neighbouring buildings, most of which are very modern in style.

On the other hand, it was preferred to keep the exhibition to a small number of important special products, rather than to spread the effort over a heap of objects of lesser interest. These considerations of various kinds governed the choice of the general appearance and layout of the pavilion.

The main building stood at the corner of the Avenues du Parc Royal and des Coudriers; it consisted of a high rotunda, surrounded by concentric galleries; in the middle glowed an enormous illuminated globe. The architect, Mr. Howard Robertson, had placed on the central axis as an entrance a high portico, surmounted by a stainless steel ceiling, in which six slender columns were mirrored; on the same axis, opposite the entrance, was the Royal Gallery, whose vestibules led on each side to the industrial and commercial exhibitions.

By means of small staircases, the visitor first ascended from the ground floor to a balcony from which he could contemplate the sphere in its entirety; from another plane, he could study it in detail. It was surmounted by a ceiling representing the starry sky; the tones were constantly changing according to the movement of the stars; and these varied lights were reflected in stainless steel panels covering the walls, as well as in a vast black glass screen placed at the back of the room. The sober, almost dark tones of this ensemble gave the hall an unusual air of grandeur and majesty.

In the centre was the great sphere, showing all the countries of the world alternately illuminated by day or plunged into night, the British Empire, tinged with red, occupying nearly a quarter of the world's surface. Belgium and the Belgian Congo were coloured in the national colours and easily recognisable. This ball of steel and glass weighed more than ten tons; its circumference exceeded twenty metres; yet nothing betrayed outside the mechanism which made it move; it was so delicately placed that a light pressure of the hand was enough to set it in motion and that the movement of the crowd of spectators, pressed around it, made it vibrate from right to left. The hours and minutes were engraved on the balustrade around it, so that one could see what time it was in the various countries of the world.

Around the Entrance Hall, two galleries, lined with dioramas, showed the role played by the British Empire in the production of precious or indispensable materials for modern civilisation: gold, nickel, rubber, wool, lacquer. Other illuminated drawings showed the importance of British trade with various parts of the world.

Opposite the main entrance was the Royal Drawing Room, plainly decorated but containing collections of the greatest interest; portraits of King George and Queen Mary, surrounded by mannequins wearing the best-known, most glorious uniforms of the British Army - such as the cavalrymen of the Bodyguard, the grenadiers of the Guards, the keepers of the Tower of London...

A whole panel was devoted to the years King Leopold III spent at the famous Eton College; photographs showed the young Sovereign in his school uniform, the room he lived in, and an old door on which, according to custom, he engraved his name, followed by the name of the Duke of Gloucester. These evocations of the British monarchy and Anglo-Belgian friendship were topped by canopies.
Between the doors, showcases contained pieces of silverware borrowed from museums, cathedral treasures and the archives of the Corporations.

Behind this central pavilion, a green lawn stretched between two white galleries, enclosing the stands of important firms in all fields of industrial or commercial activity. These included: publishing and booksellers; decorative tableware (silver, china, table linen, glassware, etc.); the British Industries Fair, held annually in London and Birmingham; the major shipping and aviation companies; the Industrial Schools; and a large number of independent firms in most manufactures.

This imposing complex was topped by a unique lighthouse, placed at the back of the central dome and with a power of three million candles. Specially built for the Brussels Exhibition, this lighthouse, whose light source was completely concealed, had an ingenious mechanism; it allowed the emission of various rays, forming complicated patterns in the sky and which could eventually be used to transmit light messages.

Finally, behind the pavilion, at the end of the lawn, lay a delightful English garden, with grassy banks, a willow-shaded pond, and freely laid out flowerbeds - reminiscent of old England, of the delightful parks scattered around cottages and manor houses. This was complemented by a tavern where English beers were served and a number of shops, including one for Hindu art.
Great Britain was also represented in the Salon d'Art Moderne by characteristic works of art; in the architectural patio (one hundred and fifty photographs and drawings tracing the evolution of the art of building in Great Britain over the last few years were displayed here); in the Palais de l'Art Ancien by admirable canvases by Reynolds, Gainsborough, Raeburn, Romney, Hogarth, landscapes, and interiors of stables, signed by less illustrious painters, but worthy of the great English School.