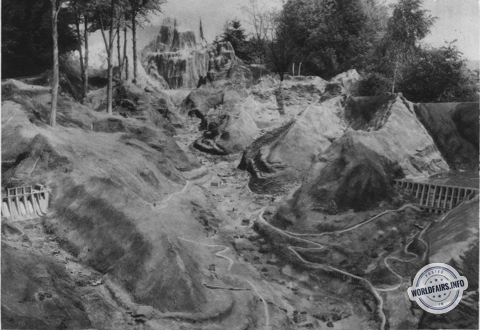 A fold of the ground, near the large halls of the Italian Section, had allowed a picturesque presentation of the results obtained beyond the Alps by the capture of hydraulic forces. From several rock-lined valleys surmounted by steep peaks, streams flowed down; here and there, dams rose up, holding back the water that would drive the turbines, hidden in low buildings, and which did not spoil the landscape.

From an elevated balcony, the visitor could see this alpine scenery and the tall trees that shaded it gave it an air of singular authenticity. The "magic ticket" (as a major English newspaper called the ticket to the Exhibition) allowed one to undertake a sort of world tour and to stop for a moment on the slopes of the Alps...

This was the picturesque way in which the Italian public utilities, the electric power production and distribution industries, had understood their representation at the Brussels Exhibition.

Forgoing diagrams, drawings and photographs, they had constructed this relief plan, showing (to scale) a number of the most interesting dams and hydroelectric installations. Many visitors stopped for a long time in front of this original "stand" and the aim of the organisers of this section was achieved.